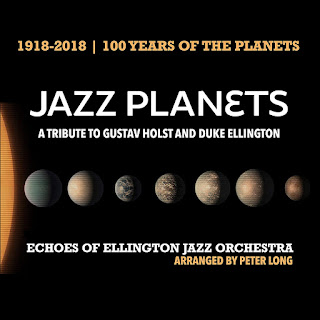 A century after the premiere of Gustav Holst's Planet suite, Peter Long and his Echoes of Ellington Jazz Orchestra give the famous original score some planetary jazz hands...

29th September 2018 marks the 100th anniversary of Gustav Holst’s premiere of his ground-breaking ‘The Planets’; a suite which, to this day, has proven to be enduringly popular, widely performed and highly influential. Now, exactly 100-years since that first premier, ‘The Planets’ will be refreshed and presented to modern-day audiences as a jazz interpretation in the style of Duke Ellington by Peter Long (leader of the Ronnie Scott Orchestra, featured sax star of the Jools Holland Rhythm and Blues Orchestra and Musical Director of The Jazz Repertory Company) and his Echoes of Ellington Jazz Orchestra release ‘Jazz Planets’.

In 1914, a young man called, Edward Ellington, wrote a simple piano piece entitled ‘Soda Fountain Rag’. Over the next sixty years, he would compose music which made him widely recognised as the foremost American composer of any genre.

….In the same year, 1914, the English composer, Gustav Holst, began writing what was set to become one of the world’s most famous suites of classical music, ‘The Planets’; each movement of the suite is named after a planet of the Solar System and it’s corresponding astrological character, as defined by Holst. The individual compositions were presented for the first time ever as their complete ‘suite’ on 29 September 1918 at The Queen’s Hall.

Now, exactly 100 years since that first premiere, Peter Long and his Echoes of Ellington Jazz Orchestra bring the work of those two great musical legends together in a fusion of classical and jazz, with the release of ‘Jazz Planets’. This came about thanks to a long car journey by Long a  year ago, whilst listening to ‘Venus’, when it suddenly struck him how Ellingtonian the curves of Holst’s melody were and how Holst's warped, flowing harmonic symmetry was so redolent to that of Ellington's composing partner, Billy Strayhorn. Ellington playing the classics is not without precedent. In 1960, he recorded two suites of pieces; a Christmas release of Tchaikovsky's ‘Nutcracker’, and a shorter but very effective treatment if ‘Peer Gynt’ by Greig. By the end of that car journey, the re-orchestration of the whole suite for an Ellington-style ‘Planets’ had come together.

Long explains: “Ellington and Holst share the ability to pull off the same clever trick. Both composers use a very high degree of sophisticated harmony and rhythm, but have the ability to infuse the whole thing with a high level of humanity with their incredible abilities as melodists. It’s this, and the extra magic ingredient of ‘genius’, that hooks the listener in.

“Each movement is a tribute to one of The Echoes of Ellington Orchestra’s stellar soloists. Each demonstrate the symbiosis which exists in the mutual influence between composer and musician, jointly celebrating the genius inherent in both Ellington and Holst. On top of which, there’s a seam of humour running through the entire suite. It seems to me that people are always amused hearing these famous classical melodies in fancy dress.”

BBC Radio 3 have recorded a live performance of ‘Jazz Planets’ at Ronnie Scott’s on 8th July for broadcast in September, alongside a forthcoming BBC documentary; whilst the band will be unveiling their own live public premiere at Cadogan Hall on Saturday 8th September. The album ‘Jazz Planets’ by Echoes of Ellington Jazz Orchestra is released on Right Track Records on 28th September 2018

Find out more at Jazzplanet.com