Music - Earth Versus The Wildhearts 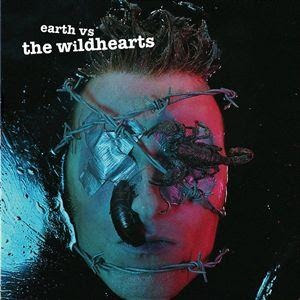 Steve Taylor-Bryant remembers back a quarter of century to when music was better. So here, his thoughts on Earth Versus The Wildhearts...


Is Earth Vs The Wildhearts really 25 years old? Apparently so, although it really does feel yesterday I bought this album. The Wildhearts were incredible. We hadn’t had a British band in rock music that we could all truly get behind and all love for a very long time until Ginger, CJ, Danny, and Stidi hit us over the head with some angst, some catchy yet serious riffs, and with more energy than any other band were putting in. Earth Versus The Wildhearts is what I imagine waking up in the 70’s and discovering punk must have felt like.

Kicking off the album with a song about living in a particularly horrible part of North London. Fantastic riffs with what feel like effortless lyrical slices of genius that speak to an entire generation are very difficult to come across. The Wildhearts managed this in the opening track. TV Tan is next, and the rawness of the style doesn’t ease up. A song about watching the television and how that box in the corner of the room can overtake your life is not the subject matter you expect from a rock band but, let’s face it, The Wildhearts aren’t just any old band, full of rock n roll tropes, these guys are a fresh voice for a different generation and Ginger knows how to tap into that life with his lyrics. It’s like he’s met me, you, any of us, and written songs for and about us, but with epic lyrics like

I light a smoke, and in'tween tokes, consult the tv guide
The bible for the pig who stays inside


Everlone starts heavy, proper heavy and then changes pace to a very quick one and as a musician it’s a joy to listen to the musicianship. On top of a very tight band that can switch time signatures and styles at will is Ginger writing more great lyrics that cut right into you.

When ideas run out, any fool can make a fist;
I got the will to resist,
I got the power of one, the fear of none, the arms to judge a man,

I bet you don't understand

Lyrics like this make me jealous that I can’t write songs, that’s not a feeling I get often. Everlone is certainly one of the stand out tracks on an album full of standout tracks. Shame on Me is one of those tracks that when it starts you just help but smile and nod your head in appreciation. This is one of those songs that when it starts has you audibly shouting “Oh Yes” like a weirdo. Fantastic again. Loveshit. Remember The Quireboys? The pop rock (but still excellent) band that just happened to have fired Ginger? Loveshit. Loveshit is a Quireboys song, just on a lot of drugs and alcohol. It’s a heavy version of The Quireboys.

The Miles Away Girl is just a wonderful listen that builds through a verse with chugging guitars before hitting a quite catchy pre-chorus. I don’t know how to put into my words why I love this song so much but it’s one that on every listen just gives me endless pleasure. My Baby is a Headfuck is by far the best track on the album. It’s just everything you want a song to be. It's musically brilliant, driving drums, great guitars, a fantastic use of a Beatles riff and lyrics that are just a level above anything else written at that time.

Suckerpunch is exactly that. You didn’t see it coming but this incredibly energetic and heavy song follows perfectly from Headfuck, both musically and subject matter. Ginger’s vocals with that distortion effect on them are quite evil sounding and that just adds an element of intrigue to a fantastically produced album. I’ve only seen The Wildhearts live once, and I was drunk, I imagine sober this track would have blown me away live.

The news of the world...

Nothing more needs to be added. It’s a track that seems to sum up every generation and is as apt today as it was then. Drinking About Life is the first real slow change of pace and contains a beautiful little drum intro before delving back into the more familiar heaviness, with Ginger more screaming and shouting than singing this time around. Drinking About Life has that ‘Lost Generation anthem’ feel that is distinctly missing from modern music. Love U Til I Don’t close out a very impressive album in another song about troubled relationships that you can’t help nodding your head to both musically and emotionally.

On a later release of Earth Versus The Wildhearts was the bonus of the incredible Caffeine Bomb but it wasn’t on the original pressing of the record, so I have purposely left it out of my thoughts, maybe I’ll get to it at some point. The Wildhearts were a shot in the arm for a disaffected few of us that kind of lost our way in the early to mid-nineties when you either loved Britpop or boybands or you died a slow death of boredom. There are certainly many great bands in the history of music but there is few whose timing was impeccable. The Beatles in the 1960’s, The Sex Pistols in the 1970’s, and in the 1990’s outside of America where to be fair bands like Nirvana and Pearl Jam were breaking, we had nothing. An entire group of music fans that just weren’t being catered for, and for ending that slog of musical loneliness I will forever be grateful to Ginger and the gang for this record. There are also not many bands that can release a full studio debut (Yes, I am aware of the E. Ps, but they are just that, E. Ps) and then follow it up with anything remotely resembling success. Do yourselves a favour, once you’ve re-listened to Earth Versus The Wildhearts go buy P.H.U.Q. you won’t regret it.