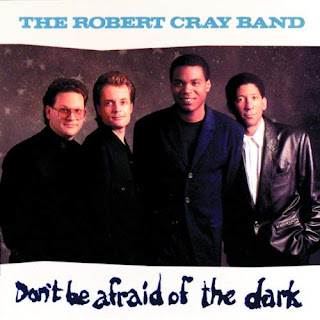 So many well-known albums turn 30 this year and Steve Taylor-Bryant and Susan Omand travel back to 1988 to revisit some of the sounds of their youth that made parents shout "Turn that noise down!" This week, Susan gets the blues about Robert Cray...

I used to really like Robert Cray’s music back in the day but I realised, when this album came up on our lists, that I had stopped listening to it quite a while ago so I jumped at the chance to revisit and see what I’d been missing.

Listening to Don’t Be Afraid of the Dark again, I can kind of see why I stopped all those years ago. It’s not that it’s bad music, far from it, it’s solid 80’s blues-style pop – highly polished, well-played guitar, tight percussion, nice brass in the background with the odd sax solo, you know the kind of thing. But that’s kind of it. There was nothing that engaged me, no song that stopped me in my tracks and physically made me sit and listen. For me, the blues as a genre should, with the benefit of an extra 30 years listening to blues, be late night, close company, bottom of the bottle kind of music – music that stops you talking and sets you soul-searching. Music that connects with you on the most basic, visceral level.

However on Don’t Be Afraid of the Dark, it’s all a bit too upbeat and generic for that. Every song on the album sounds like every other song on the album and they all sound like they’d make a great cameo appearance as “pub band” in an 80’s detective series – it has that TV soundtrack quality about it, so much so I went looking and yes, Cray’s music has indeed featured in the likes of Miami Vice.

So no, it’s not an awful album at all. It makes good musak if you want something inoffensive on in the background that won’t grate on your nerves but neither will it disrupt you from what else you’re doing. I get the feeling that, back in the day, I didn’t actively “stop” listening to Robert Cray - I just got bored and wandered off.