Turn That Noise Down - Jane's Addiction 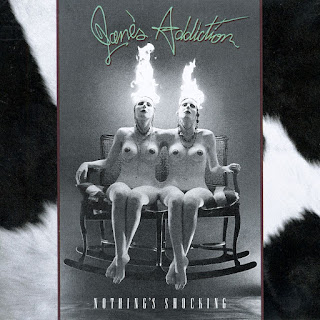 So many well-known albums turn 30 this year and Steve Taylor-Bryant and Susan Omand travel back to 1988 to revisit some of the sounds of their youth that made parents shout "Turn that noise down!" This week Steve decides Nothing's Shocking for Jane's Addiction...

One of my favourite bands to come out of the so called 'alternative' rock era of the late 1980’s and early 1990’s was Jane’s Addiction. Dave Navarro is a musician I’ve liked since I first heard him play, just before this album came out as it happens, and his time in Red Hot Chilli Peppers led to One Hot Minute which is by far their greatest achievement, so getting to review the band's second album but first big label release was always going to be a joy.

Nothing’s Shocking is easily my favourite Jane’s Addiction record, considering the background issues, drugs versus sobriety, Perry Farrell wanting over 60% of any royalties and, possibly, girlfriend swapping that went on, it’s a miracle the record was even made but the tensions and passions that were so obviously riding high come across in every track with drummer Stephen Perkins never sounding better than he does on this album and Had a Dad in particular. Yes maybe re-recorded older tracks is a bit of a cheat but those three songs are Jane Says, Pigs in Zen, and Mountain Song which I think deserved another outing and sound even better with producer Dave Jerden’s magical touch.

No one will ever change my mind about Jane’s Addiction, Navarro, or the Chilli’s One Hot Minute and telling our editor I needed longer to complete this article was just so I could get away with spending more time listening to it.