Continuing our daily coverage of what's on at The Proms 2018, Susan Omand has a quick look at the programme for Prom 58: The Sound of an Orchestra ...

Tonight's Prom takes its inspiration from a set of television programmes done by the Birthday Boy of the weekend Leonard Bernstein. Since 1855 the New York Philharmonic Orchestra has done regular concerts to allow children to experience and learn about classical music, starting with Family Matinees.  These evolved, in 1914, into Young People's Concerts, events which combined explanatory lectures with orchestra performances. These were toured around the country and have now been running uninterrupted ever since 1926, the latest in the series being full multimedia interactive experiences that you can find out more about on the NYPhil website.

When Bernstein took over as conductor of the NYPhil in 1958, he latched on to the idea of music education through these Young People's Concerts and he took advantage of burgeoning TV audiences to get the message out further by getting his lecture/concerts televised four times a year throughout the 60s on CBS which then went on to be watched around the world. All in all he did 53 televised Young People's Concerts, with the final one airing in 1972. The concerts covered very specific subjects such as What Is a Melody, Who is Gustav Mahler and, in Winter 1965, he did one called The Sound of an Orchestra. 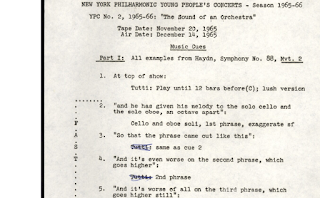 Tonight's Prom is not an exact recreation of the concert, even though, as you can see above, the script notes for it still exist, but it will be an updated homage to the format  and feature the Royal Philharmonic Orchestra conducted by Joshua Weilerstein. The first half of the journey into ‘The Sound of an Orchestra’ presents "a tapestry of words, projections and music, leading from the primal anarchy of tuning-up to the dynamic complexity of Stravinsky’s The Rite of Spring." In the second half works spanning almost 250 years are explored – from the unsettling echo chamber of Ligeti’s Apparitions, through Bernstein in Broadway mode, to Debussy’s shimmering seascape La mer and Beethoven’s resolute Egmont overture.

However, I was overjoyed to find some of the original 1960s TV shows available on the interwebs. Here's the first 15 minutes or so of the original The Sound of an Orchestra with the maestro himself.