News - What Does This Button Do 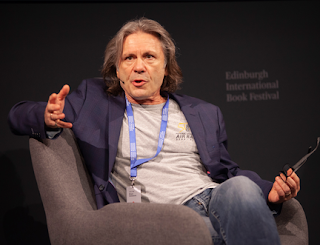 “The one thing that trumps everything to do with Iron Maiden is music,” according to the band’s frontman Bruce Dickinson. The musician, commercial pilot, beer brewer and fencing enthusiast was at a sold out event last weekend at the Edinburgh International Book Festival, talking about his bestselling memoir What Does This Button Do?

It’s 37 years since Dickinson successfully auditioned to be Iron Maiden’s singer, and he puts the longevity of the band down to the fact that they’ve “grown up together”. “When you chuck together a bunch of people who are 23, 24, 25, and put them in a little capsule, ship them round the world with unlimited amounts of chemicals, alcohol, and access to loads of girls, it’s a miracle that any of us are still alive let alone together,” he admitted.

“I’ve spent years in a tour bus sleeping in a coffin with these people; I’m not interested in learning anything more about their personal habits. But we get on in a way that… Well, just because you came out of the same birth canal doesn’t mean that you have to like everybody in your family. In our case, we had a reverse birth, because none of us realised that our birth mum was Iron Maiden.

“We were all put together as musicians, head-hunted in effect, apart from Steve Harris; and I think, longterm, that’s why we’re still together, that’s why we still get on. Because we’ve grown into each other, like a reverse family. We all acknowledge that the reason we are together is because of who gave birth to us—this thing called Iron Maiden.”

With all of Iron Maiden band members now in their early 60s, keeping fit is an ever-greater issue, but they have long taken a responsible view when it comes to staying healthy. “After the first couple of massive hangovers that last three days, actually it’s boring,” Dickinson said. “I like a beer, and every so often things get out of hand, but real life and being on stage are far more exciting and far more interesting than just oblivion.

“We always took that approach; it was pretty much a given with us. We still have a very active Iron Maiden football team on the road. Yes, after a show, I now get out of bed in the morning and it takes me about two hours to be able to walk, let alone do anything else. But I regard it as a privilege to be able to do what we do as well as we do it now.

“We’ve always seen the music as so important, why would you want to screw it up?”