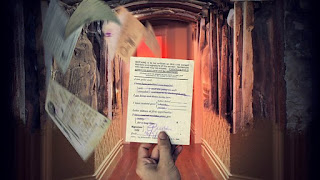 For the first time ever, virtual reality will be seen at the BBC Proms in a new work by Anna Meredith and 59 Productions...

Bringing the BBC Proms to life as never before, the VR Prom is a further iteration of the Five Telegrams project which formally launched the BBC Proms 2018 season. A co-commission for Anna Meredith and 59 Productions by the BBC Proms, Edinburgh International Festival and 14-18 NOW (the UK’s arts programme for the First World War centenary), this major new work for orchestra, choir and projections explores the varied forms of communication from the front lines.

Its second movement, entitled Field Postcard, forms the basis of the VR experience, drawing on the talents of both the BBC Proms Youth Ensemble and the National Youth Choir of Great Britain, alongside the BBC Symphony Orchestra under the baton of their chief conductor, Sakari Oramo.


The project comes in two iterations: Nothing to be Written - a seven-minute immersive experience inspired by one of the First World War’s primary communication modes, the ‘field postcard’; and a 25-minute experience from ‘within’ the Royal Albert Hall featuring Anna Meredith’s recently premiered full score of Five Telegrams, co-commissioned by the BBC Proms, Edinburgh International Festival, and 14-18 NOW.

Nothing to be Written takes the viewer on a highly emotive journey, positioning them as the main protagonist in the narrative: civilians transported on the same journey fared by their loved-ones during World War I. The piece merges two worlds - the hallways across the country with families and friends waiting quietly for news, with the unrestrained violence of the trenches. Throughout the piece, an image of a field postcard remains the central thread.

Set to Meredith’s dramatic and haunting choral score for Five Telegrams, the experience is a powerful and emotive exploration of the human stories beyond the edges of the postcards. Recorded live on the First Night of the Proms, Five Telegrams has been captured in cutting-edge spatialised sound with very high quality ambisonics, offering audiences the opportunity to experience the composition in its entirety in maximum quality.

Anna Meredith said "I'm totally delighted with 59 Productions' beautiful story telling in Nothing to be Written - to me it mirrors the music I wrote by allowing you to experience the texture both at a distance or really zooming into the detail of the Field Postcards and the stories they tell beyond the prescribed text."

Over 300,000 censored letters were sent each day from the front lines during the height of World War 1. During the war, censorship of mail meant that soldiers had few ways to regularly correspond with their loved ones at home. Field postcards, for example, offered soldiers the chance to quickly communicate their status, but at the cost of detail. “I am quite well”, “I have been admitted into hospital”, “I have received no letter from you” - for many, these stock phrases were their only regular link between families at home and soldiers on the frontline.

As one of the primary modes of communication used at this time, the piece marks the festival’s continued commitment to bringing lesser-known stories and the history of the Great War to life in this important centenary year.

To accompany Nothing to be Written, a full 25-minute, immersive experience has been developed to be previewed at the BBC Proms. Shaped entirely around the full score for Five Telegrams, the first four movements of the experience will place the user in the centre of the Royal Albert Hall. As the music plays, the walls and geometry of the building morph and change.

Lysander Ashton, Director of 59 Productions, said “You find yourself alone in this spectacular space. There is a reverent hush alive with possibility. The space feels real, but heightened. As the music begins, the hall begins to transform in response to the music. The architecture around you shifts and changes, becoming a canvas on which the music is painted.”

Produced by the BBC’s VR Hub and 59 Productions and featuring spatial sound recording and mix by the BBC’s Audio Research & Development team, Nothing to be Written receives its world premiere at the BBC Proms on Tuesday 21 August. It then travels to 14-18 NOW-linked events throughout the Autumn, followed by an international premiere at Raindance Film Festival. The experience has been developed for Oculus Go and will be available on public release to other major VR and BBC platforms later this year.