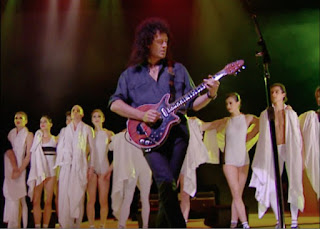 The new documentary Queen + Bejart: Ballet For Life by Lynne Wake and Simon Lupton is to have a UK screening in the London at the French Institute on Wednesday 12th September...

Produced by Simon Lupton and Jim Beach and directed by Lynne Wake (a former dancer with the Royal Ballet) in aid of the Mercury Phoenix Trust, the hour-long documentary, which pays tribute to a generation of artists who died of AIDS in the early 90’s including Freddie Mercury and dancer, Jorge Donn, explores the difficult period where the remaining members of Queen struggled to come to terms with the loss of Freddie. However, the release of "Made In Heaven" inspired a unique collaboration between Maurice Béjart and Queen, which culminated in the birth of ‘Ballet for Life'. The result was an artistic creation unlike any other, but it is the impact on the story of Queen, and the legacy it has created that is most extraordinary.


The film includes brand new interviews with Brian May and Roger Taylor, as well as dancer and Freddie's friend, Wayne Sleep, Choreographer Arlene Phillips, and members of the original Dance Company including Gil Roman, principal dancer in the original ballet and the current Artistic Director at Béjart Ballet Lausanne. It also features previously unseen footage of Maurice Béjart and the behind the scenes build up to the Ballet for Life premiere, which included John Deacon’s last ever live appearance with Queen when the band performed The Show Must Go On with Elton John.

Simon Lupton, who will be in Montreux to present the feature and will take part in a live Q&A session, said "This is probably the most moving and intriguing Queen documentary I've been involved in to date. Until now 'Ballet for Life' has always been to me a curiosity in the Queen story, born in a period where we were all wondering what the future held for the band. But witnessing the ballet company preparing to take it on tour once again, and hearing Roger and Brian explain what it means to them, revealed what an incredible piece of work it is, and just how important it was in Queen's journey. I only hope this film helps other fans make this discovery too."


Queen and Béjart: Ballet For Life has it's World premiere at the Official Freddie Mercury Birthday Party on September 8th in Montreux.

Find out more and book tickets at WWW.INSTITUT-FRANCAIS.ORG.UK