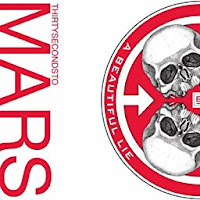 In an effort to further her musical education, Susan Omand has been set "homework" of listening to albums released after the 1980s that she has missed out on. This time she discovers A Beautiful Lie by Thirty Seconds to Mars...

I surprised myself by actually recognising the cover to this album! It comes up occasionally on the “Hard Rock Radio” stream (yay for Amazon Music making the decisions for me) I listen to while I’m doing my morning exercising thing and I remember thinking at the time what beautifully drawn skulls they were, however I don’t remember much about the tracks, probably because I was counting reps or concentrating on my reverse fly form or something, so it was nice to just sit and listen to the whole album without sweat in my eyes.

And it is a really interesting album. It’s like they’ve let a rock band record an album in the BBC Radiophonics workshop! I love all the over-synth’ed intro in Attack and there’s a bit in The Kill that sounds like the dumbidybum bit of the Doctor Who theme (I know what I mean). Battle for One has some serious noise with it (this is a good thing, I just don’t know how better to describe it) and the title track, A Beautiful Lie, is just emo through and through. With most of the rest they’re strong 80’s sounding pop-rock tracks to have on in the background as they do what they’re meant to and they’re very catchy. In the few times I’ve listened to the album now I’ve found myself humming along to Was It a Dream among others. To be honest, I get a vaguely Celtic feel from a lot of the music and, again, I can’t really explain why, it just “feels” Celtic rather than being English or American – I’m reminded of, by turns, Gun, Nazareth and even Wolfstone in bits, with splashes of Mogwai thrown in for good measure. And Hunter is a great track - it sounds like they’ve knocked an octave off Bjork’s voice and let her sing instead of *googles line-up* Ja…

WOAH. Hold on. Stop the show.

THIS is Jared Leto’s band??? I mean, I knew he was in a band but I hadn’t realised it was this one. Wow. So that’s him being all “lower-register Bjork” then? That’s actually really cool. Yes, I know, it’s not the done thing to like Jared Leto’s work but, I’m sorry, I do and this just underlines it for me because I have listened to this album several times now, including when I didn’t need to, purely for the sheer enjoyment of it. I just love his voice.

OK, back to the plot.

Although I really, really like Was It a Dream, it is pipped to the Favourite Track winning post by A Modern Myth. This one is totally different to everything else on the album and just gets under my skin for some reason. I love the insidiously whispery vocals, the acoustic guitars (complete with feedback string noise) and the almost orchestral backing that builds and then drops again to a whispered acapella finish. It’s shiveringly wonderful.

So yes, you can consider me educated this time. And I even learned something! Thirty Seconds to Mars are on my listening list from now on and I’m going to investigate them further.