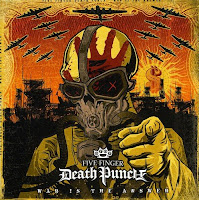 In an effort to further her musical education, Susan Omand has been set "homework" of listening to albums released after the 1980s that she has missed out on. This time War Is The Answer by Five Finger Death Punch...

I was prepared for Five Finger Death Punch to be a bit of a “marmite” band. I was either going to love their sound or hate it. What I wasn’t prepared for was for the marmite to be spread through the album and, in some cases, even through a single song! But I’ve narrowed down why and it’s all because of my, by now much heralded, “raaar” aversion.

The first track on War is the Answer, Dying Breed, is a case in point. Having made myself sit through it several times, I can now appreciate the instrumentation a lot (although the drummer must be puggled by the end of it maintaining that speed) it’s the in-your-face aggressiveness of the shouty vocals that I don’t like. And I didn’t like it to the point that, had I not had to review the album, I would have switched it off part way through the first listen of this song and consigned the whole album, and the band, to another of “those” ones that I just didn’t understand.

However, I persevered and the second track, Hard to See, is very close to brilliant! Heavy, mostly melodic, it ticks such a lot of boxes. The guitar playing is sublime without being overly fretwanky and the back line thunders beautifully. There’s just that tiny bit of Raarness that knocks it back for me.

Bulletproof is another one that manages to marmite me within the one song. The backing is superb, the lead vocals are awful. Give me an instrumental version of this one any day because I could listen to that guitar all day long.

But then you get to something like Crossing Over. Wow, this is perfect. It reminded me SO much of the wonderful Scorpions and MSG back in their heyday – it has that Germanic rock feel to it. Upbeat but solid and with glorious vocals – see the guy CAN sing he just, for some reason, chooses not to. I don’t get it.

And so it goes on. There’s songs on this album that I really love (Crossing Over, Far From Home, Walk Away and their cover of Bad Company, which is brilliant), songs that I have to skip so I don’t throw expensive hi-fi kit out of the window (Dying Breed, War is the Answer, Falling in Hate, Burn it Down) and some that I really like apart from some of the vocals (Bulletproof, Hard to See, No-one Gets Left Behind, My Own Hell).

The absolute stand out on the album for me though is Canto 34. It. Is. Stunning. This is the instrumental that I had wanted right from the start. It has everything, from an interesting title (Canto is from the Latin for song or singing and a canto is also the verse division in long form mediaeval poetry, often sung rather than recited by the minstrels in a 14th century court - so there, you’ve learned something too), to varied and unusual time signatures that really excite my inner jazz fiend, to superb playing and orchestration and sound distortion that just makes me smile so much. It’s unintentionally prog rock and I love it.

So yes, for the final (nearly) album on year 1 of Educating Omand you can consider me educated.