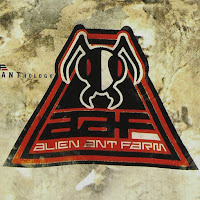 In an effort to further her musical education, Susan Omand has been set "homework" of listening to albums released after the 1980s that she has missed out on. This time it's the ANT-hology of Alien Ant Farm...

I must admit that Alien Ant Farm didn’t sound like what I thought they would. That’s neither a good thing nor a bad thing, just something to note. The only track I had heard of theirs before was one that happens to be on this album, their cover of the Michael Jackson song Smooth Criminal, which hit the charts back in 2001. I only remember that one because, although I’m not a huge MJ fan, this is my favourite song of his and I thought they did a not bad job of it.

Other than that, though, this was a whole new experience for me and, unexpectedly, I found this to be quite a mixed album. I had kind of pigeonholed the band in the skater-punk-lots-of-thrashy-guitars-and-whiny-college-boy-vocals category, so there were songs on the album that out and out surprised me – I mean the reggae beat on Flesh and Bone was almost exactly the opposite of what I was expecting. Contrast that with the pure metal backing on both Courage and Wish and the Oasis Wonderwall-ness of Happy Death Day and Universe (being compared to Oasis is not a good thing in my book btw) and there’s a fairly eclectic sound to the band. They did, however, stick true to expected form for a few of the tracks – Movies, Summer and Calico could have been a song from any of the genre bands around at the time, although Whisper and Stranded were heavier and more Green Day-ish.

However, my favourite track on the album was Attitude. I know it was my favourite because it was the only one of the lot that I actually checked what was playing the first time I heard it (usually track notes wait til the second or third listen through). It is just so radically different to all the rest of the tracks on the album, with a solid 80s Miami Sound Machine sound to the synth and percussion at the start, that I thought I must have hit random play and got something totally different. The excellent stripped back guitar throughout the song also gives the vocals a chance to shine without either fighting through the normal wall of sound or having to go all emo in a ballad and the harmonies were interesting and polished. It’s a very incongruous track alongside the rest of the album, and the better for it.

So I guess at least I can say I have listened to Alien Ant Farm now so you can consider me to have attended class; even if I wasn’t educated, nothing was awful. Would I listen to it again? Well, I wouldn’t switch it off which I might have done before this, so I guess you can call that a win. And I do really appreciate the pun in the album title.