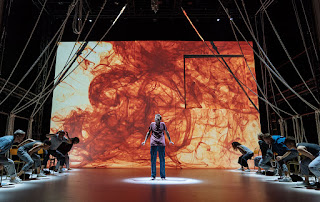 The Patrick Ness novel A Monster Calls is brought to the London stage in a powerful new adaptation by director Sally Cookson...

‘Stories are wild creatures, the monster said. When you let them loose, who knows what havoc they might wreak?’

Thirteen-year-old Conor and his mum have managed just fine since his dad moved to America. But now his mum’s very sick and she’s not getting any better. His grandmother won’t stop interfering and the kids at school won’t look him in the eye.

Then, one night, at seven minutes past midnight, Conor is woken by something at his window. A monster has come walking. It’s come to tell Conor tales from when it walked before. And when it’s finished, Conor must tell his own story and face his deepest fears.

On publication, the novel A Monster Calls became a bestseller with children and adults alike because of its insightful look at love, loss and healing. It garnered huge critical acclaim, including an unprecedented double win of the Carnegie and Greenaway Medals for outstanding children’s literature and illustration. It's also been a big hit on the big screen with the 2016 film adaptation, written by Ness himself and directed by Jurassic World: Fallen Kingdom director J A Bayona, picking up multiple awards (read our review of the film over on The DreamCage.)

This new theatre adaptation is suitable for adults and children aged 10 and over. It runs from 17th July, with previews starting on 7th and a Q & A session pre-show on 20th July with the author and the director, until 25th August.