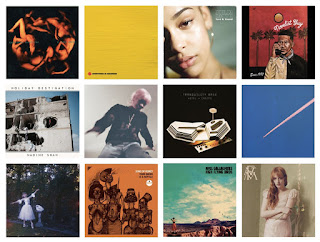 The shortlist has been announced for the 2018 Hyundai Mercury Prize...

The Hyundai Mercury Prize ‘Albums of the Year’ celebrates and promotes the best of UK music recognising artistic achievement across a range of contemporary music genres. The shortlist was chosen by an independent judging panel and was revealed yesterday at a Launch event, hosted by BBC Music’s Huw Stephens.

The shortlisted albums are:

Arctic Monkeys – ‘Tranquility Base Hotel & Casino’
Everything Everything – ‘A Fever Dream’
Everything is Recorded – ‘Everything is Recorded’
Florence + The Machine – ‘High as Hope’
Jorja Smith – ‘Lost & Found’
King Krule – ‘The Ooz’
Lily Allen – ‘No Shame’
Nadine Shah – ‘Holiday Destination’
Noel Gallagher’s High Flying Birds – ‘Who Built the Moon?’
Novelist – ‘Novelist Guy’
Sons of Kemet – ‘Your Queen is a Reptile’
Wolf Alice – ‘Visions of a Life’

You may be surprised to see a lot of very famous names in among the lesser known acts in the list above, that's because the prize is given for new albums, not just new artists or just debut albums, of the year. The Mercury Prize website describes the award as "the music equivalent to the Booker Prize for literature and the Turner Prize for art," also stating that "The main objectives of the Prize are to recognise and celebrate artistic achievement, provide a snapshot of the year in music and to help introduce new albums from a range of music genres to a wider audience," however the true purpose of the award is being heavily questioned in the media again this year, with some claiming that such a "safe" shortlist is not a true reflection of the talent available this year in British and Irish music.

With the first Mercury Prize being awarded in 1992 (the award name being nothing to do with Freddie Mercury who had died the previous year), and won by Primal Scream for their album 'Screamadelica', the Prize itself has no categories, and is open to all genres of music. There are 12 shortlisted ‘Albums of the Year’ and 1 overall winner. The genres of music that are represented tend to vary from year to year and can include solo singers and groups from classical music as well as rock and pop acts although albums of compilations of previously released tracks don't count because the prize is to celebrate new music.

The judges said of this year's shortlist, “This year’s Hyundai Mercury Prize celebrates albums by musicians at all stages of their careers, but with a shared belief in the importance of music for navigating life’s challenges – whether personal or political, falling in or out of love, growing up or looking back, angry or ecstatic. The music here is funny and inspiring, smart and moving. Twelve amazing albums!”

The 2018 Awards Show will take place on Thursday 20 September at the Eventim Apollo, Hammersmith.The event will feature live performances from many of the shortlisted artists and the evening will culminate in the announcement of the overall winner of the 2018 Hyundai Mercury Prize for ‘Album of the Year’.

Find out more about the eligibility criteria of the award on the Mercury Prize website.