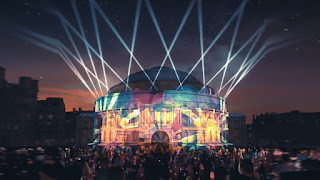 With less than a week to go now before the First Night of the Proms, Five Telegrams will light up the Royal Albert Hall next Thursday evening...

In a unique coming together of music and projections, spectacular visuals will be projected onto the external façade of the Royal Albert Hall, whilst a brand new score by composer Anna Meredith will be transmitted live from within the Royal Albert Hall.  Then, next month, it will be used as the curtain raiser for the Edinburgh International Festival when it is shown on the Usher Hall in Edinburgh on 3rd August.

This free event will give audiences an opportunity to see a multifaceted work ahead of the much anticipated First Night Of The Proms. Here, Meredith’s music and 59 Productions’ extraordinary visuals come together in Five Telegrams: Sender performed by the BBC Symphony Orchestra, BBC Proms Youth Ensemble, National Youth Choir of Great Britain and conductor Sakari Oramo.

Richard Slaney, Managing Director of 59 Productions, said "59 Productions are thrilled to be transforming the iconic facade of the Royal Albert Hall with bespoke projections, and in doing so hope to bring a taste of the BBC Proms to a brand new audience. The Telegrams and communication themes from the First World War have proved extremely rich source material, and in combination with Anna’s score we hope that audiences find this opening event both boldly eye-catching as well as thought-provoking."

Anna Meredith added "I’m so excited that we are bringing Five Telegrams to both the inside and outside of the RAH. It’s been such a privilege to work with 59 Productions, who are world leaders on these kinds of large-scale events, and we’ve worked hard to produce a piece designed to work on this huge canvas. I’ve loved writing with these kinds of big gestures in mind and hope that this event will be a dramatic start to the Proms season as well as opening it up to new audiences."

Five Telegrams: Sender is both an audio and visual work that draws upon contemporary responses to the communication infrastructure of the First World War as the BBC Proms commemorates the end of the ‘Great War’ in its centenary year. The work is a joint commission for the BBC Proms, Edinburgh International Festival and 14-18 NOW, the UK’s arts programme for the First World War centenary, in collaboration with the Royal Albert Hall.

Considered one of Britain’s most eclectic and innovative artists, Anna Meredith’s music has been performed worldwide including at the BBC Proms’ iconic, Last Night Of The Proms. 59 Productions are the multi award-winning company of artists behind the design and creative direction of the record-breaking David Bowie Is exhibition, video design of the Opening Ceremony of the London 2012 Olympic Games and the projection design of The Nutcracker, staged at the Royal Albert Hall in 2017.

Five Telegrams: Sender will be available to watch in full via BBC iPlayer on Friday 13 July, following full coverage of the First Night of the Proms on BBC Two.