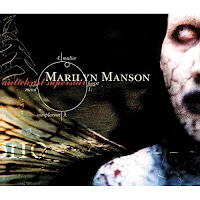 In an effort to further her musical education, Susan Omand has been set "homework" of listening to albums released after the 1980s that she has missed out on. This time it's the Antichrist Superstar that is Marilyn Manson ...

Ah the glorious Brian Hugh Warner – welcome to my kind of weirdo. Yes, you may be surprised, but I do know (and really like!) Marilyn Manson’s work and have followed his music, acting and artistic career for many years. I mean, anyone that can make a Depeche Mode song even vaguely palatable (let alone as brilliant as his cover of Own Personal Jesus is) has to be worth some of your listening time, right?

That song is not on this album, indeed it’s not on any album apart from the Best Of, but so many great songs are here. The best known are, of course, the singles, Beautiful People and Tourniquet, but I’m not going to talk about any of them. You see, the thing for me about Antichrist Superstar is that you can’t just treat it as a playlist of individual songs – the whole is a rock opera of such mastery that is so much more than the sum of it parts. The album is split into three cycles, starting with The Heirophant, continuing with Inauguration of the Worm and concluding with Disintegrator Rising. The underlying story is essentially an antithetic response to Andrew Lloyd Webber’s Jesus Christ Superstar, becoming an allegory against the rise of fascism and the religious right, and is based around a supernatural being, known only as The Worm, who takes over the world with the purpose of initiating the apocalypse. The first cycle tells of “the world before” and the foretelling of the end by the priests, the second is the growth and transformation of The Worm until the start of the third cycle where the Antichrist is fully formed and becomes all powerful, sociopathic and self-satisfying, leading to the destruction of humankind. Honestly, if you sang it as German leitmotif and arias to a full orchestral backing you would have something utterly Wagnerian in construction - it is brilliant. Add to this that Antichrist Superstar is the first/last in the long story arc over a trilogy of albums (first chronologically, last in story order) and there’s such a depth and complexity of artistic vision here, it is stunning, stunning work.

But you don’t really want to know about all that, do you? You don’t really care, because that nuance, that level of artistry, is all lost in these days of streaming and picking and choosing tracks, as albums are no longer treated as albums but individual songs that can be re-ordered, skipped over and randomised with other artists. In this case, you lose so much by doing that… you actually miss the end of the world.