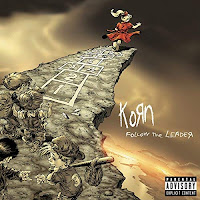 In an effort to further her musical education, Susan Omand has been set "homework" of listening to albums released after the 1980s that she has missed out on. This time it's Follow the Leader and Korn ...

Aah you thought we’d forgotten about this didn’t you? No, even if the Scottish schools have been on holiday for nearly two weeks now, Educating Omand persists… although looking at what today’s one is, it may have been better not to.

Korn is one of “those” bands for me that are in the “I don’t like it what is it” category because I’m not sure I’ve ever sat and listened to any of their songs, let alone a whole album so this will be an experience. Here’s my track by track notes:

It’s On – listening on headphones, I love the intro – it’s properly nausea inducing. Believe me, this is a good thing here as the warped instruments are precisely not what I was expecting. The first thing I thought when I heard the voice was “a male version of Bjork” – it has that same off key whine about it.

Freak on a Leash – Why do I think of Captain Scarlet here? It’s maybe the wateriness off the distortion. Whatever it is, it’s fascinating. As is the vocal. It’s like the whole track is a neo-classical experimental piece in sections with surprising discordant sections and unexpected instrumentation between the more conventional.

Got the Life – certainly has got life. This is the first track that has my head bobbing (if not banging). Nice use of feedback and falsetto and the headphones allow the stereo layering to come into its own very effectively.

Dead Bodies Everywhere – woah. OK this is different – the music box opening with that building bass tone is incredible. And there’s an almost b-movie feel to the screechy instrumentation used in the rest of it interspersed with the more “normal” – although I’m getting the feeling that there is no normal where Korn are concerned.

Children of the Korn – bloody hell, that’s Ice Cube! (Yes, I’m down wiv my gangsta rappers) The counterpoint of the two styles is intense but it really works.

BBK – it’s odd. I’m getting used to the unexpectedness of it now and, even though the drumming is excellent and scat vocals scatter throughout a very cool track, it’s probably the weakest so far.

Pretty – another change of pace and the stereo is brilliant here with a different track going on in each ear waiting for the brain to make sense of it in the middle.

All in the Family – a different voice? A bit of a dig turns up the fact that I’ve heard the voice before as this is Fred Durst from Limp Bizkit so that’s a bit of a novelty. I maybe shouldn’t have listened to the lyrics quite so closely though (so many mental images I can’t unsee now) but at least they are intelligible.

Reclaim my Place – damn that’s a catchy riff. We’re back to the Bjork school of holding a tune with this one too but that’s ok. I realise that it has its place and it works. And the bass is shiver inducing. It’s brilliant.

Justin – This sounds like the Prodigy’s Smack My Bitch Up (this is a good thing) from the opener to it until the heavy stuff kicks in. It is a song where I’d really love to hear/see each part separately because the construction is really complex and interesting.

Seed – how 60s hippy is this intro?! It’s Jefferson Airplane’s White Rabbit over again. The 60’s psychedelia continues adding a tension with guitar feedback behind the regular beat. If they ever remake The Prisoner, this needs to be in it. Just when you’re lulled into almost a false sense of security - that pause pulls you right back in.

Cameltosis – I sit corrected. Even though there’s another new voice, this, not BBK, is the weakest track for me. I’m not a fan of the smarmy sound of The Pharcyde, or hippety hop in general tbh, and it doesn’t translate well here, even with the interesting bubbly noises.

My Gift to You – BAGPIPES!! Now you’re talking my language. This is immense. I was struggling to pick a favourite track on the album before now as so many had good things going for them but bagpipes… I can’t say no. The rest of the track is mind-blowing too – almost operatic in bits with a thunderous bass. And his voice here gives me the shivers. I love it.

Earache My Eye – I wondered if it would be and hahahaha, yes, it really is! Any work by Cheech and Chong is ok by me.

And that really is it now and… I’m very impressed. There’s a lot of variety, some excellent composition and orchestration and his voice is absolutely unique and fascinating, even if the lyrics may need a little work in some places. The songs all work individually and it coalesces incredibly well as an album with a flow between the tracks. And I’m also seriously surprised. As a band, Korn is not what I expected at all and definitely don’t deserve to have been ignored by me up until now. Consider me educated and I think I’ll blame the backwards R in their name for putting me off before…