Turn That Noise Down - The Style Council 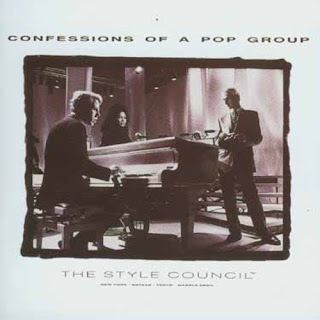 So many well-known albums turn 30 this year and Steve Taylor-Bryant and Susan Omand travel back to 1988 to revisit some of the sounds of their youth that made parents shout "Turn that noise down!" This week Susan gets annoyed by the council...

My name is Susan and I have an irrational dislike of Paul Weller.

I can’t remember what he’s done, or not done, to deserve this internal vitriol from me though. I loved the music of The Jam (although we can all pretty much agree that Bruce Foxton is responsible for that) when I went through my, albeit short-lived, mod phase at age 14 and I can almost certainly guarantee that every time I hear a song on the radio that I don’t know and really like, it ends up being a Paul Weller song. But I just don’t like him.

So, to try and break this hoodoo a bit, when I saw The Style Council album Confessions of a Pop Group come up on our list of Turn That Noise Down anniversary albums for this year, I decided to give it a go because I have studiously ignored it, and the band, for the past 30 years because of Paul Weller’s involvement. And…

…the album annoyed me. It didn’t help that I spent most of the first track trying to think of the half-remembered song from the 80s (I only had one line of melody in my head for it) that it reminded me of, only to eventually discover, after much ruining of my streaming service search history, that it was another song by The Style Council – Shout to the Top from a previous album. Bah. It annoyed me too that, musically, this is a very interesting album, with a capella choirs, jazz bar piano, Floyd-like guitar and instruments more at home in a classical orchestra mixing through experimental 80’s synth funk topped off with a voice that reminds me of Marty Pellow at his lounge-singer best. So now I’m annoyed that I’m annoyed by it because I can’t find anything really wrong with it. It’s not the perfect album but it’s really not bad. It would be the kind of thing that any normal person would put on in the background while doing something else but maybe not go to a gig for.

So, does The Style Council deserve to be another target for my irrational dislike? Well, yes. Because Paul Weller was involved and I don’t like him.