Turn That Noise Down - Status Quo 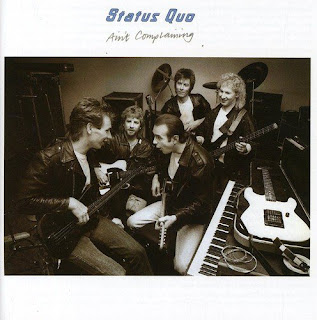 So many well-known albums turn 30 this year and Steve Taylor-Bryant and Susan Omand travel back to 1988 to revisit some of the sounds of their youth that made parents shout "Turn that noise down!" This week Susan is complaining about Ain't Complaining by Status Quo...

Status Quo was a part of my childhood, the music that got played in the house (by my mother - Dad preferred Motorhead) all through the 70s and early 80s, so I’ve always had a soft spot for it. I’ve rocked the double denim in my time and learned to headbang with my hands in my pockets… but even I, huge fan that I am, must admit that they lost their way a bit in the late 80’s and this album is proof of that.

I think the studio felt, after Live Aid and a change of line-up, bassist Alan Lancaster now being persona non grata, that they needed to try and evolve their sound a bit, to leave the past behind. This transition started in the album before this one,  In The Army Now, which took them away from the recognisably Quo 12 bar blues style rock and roll, although it still had a few good tracks on it. However, this Quo Nouveau trend continued and, for me, they pushed it a little too far this time. I’m not saying the album’s awful, it’s fine, it’s just not The Quo sound (btw if you think my rants about the GnR sound since Slash left are bad, you should hear my rants about the Quo sound since Lancaster left).

So, anyway, forgetting for a moment that this is meant to be Status Quo here, the album wasn’t quite as bad as I remembered… but it also wasn’t great. There is some neat stereo trickery in the title track, which is also one of the singles of the album, as was Who Gets the Love. But the song you’ll most remember if you were around at the time was Burning Bridges, which “borrowed” a highly recognisable folk song for its guitar-break (and, itself, got re-borrowed a few years later for a Man United football song) and pretty much summed up the feel of the rest of the original 1988 release. It’s very “80’s pub covers band” at its best. It’s dancey and tuneful, there’s close harmony, it’s all very nice. However, at its worst, there’s also far too much synth and sample on the album, it’s way too over-produced, vacuous, bland and forgettable pop. But we can’t forget, can we? Because it’s Status Quo. And the Quo needs to ROCK!

So, surprisingly, if you do listen to the album, I’m going to advise that you try to get the 2006 remastered reissue of it. The added tracks (ignoring the charity single rehash Running All Over the World) are the B-sides to the singles and inject back in much of the missing meatiness that you expect from the Quo of old. The intro to That’s Alright reminds me very much of Procul Harum’s Conquistador and Halloween is, very nearly, “proper” hard rock. Lean Machine and The Greatest Fighter both could have been in a Rocky training montage (this is a good thing btw) and the 12 bar rock 'n' roll guitar and piano vamping on The Reason for Goodbye is exactly the reason that we can never say goodbye to the music of Status Quo, no matter how dodgy it got there for a while.

But let’s not burn our bridges yet...