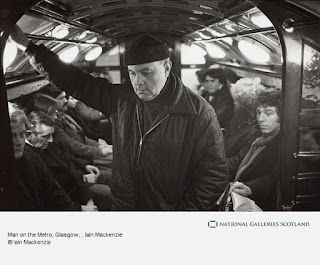 The extraordinary advances in the technology of travel over the past 170 years, and their wide-ranging impact on our lives will be the subject of a dramatic and inspiring new exhibition of photographs at the Scottish National Portrait Gallery (SNPG) this summer...

Part of the Edinburgh Art Festival, Planes, Trains and Automobiles will draw upon the outstanding collection of the National Galleries of Scotland to consider the rapid expansion of transportation from the end of the Industrial Revolution to the present day. It will feature 70 exceptional images, including key images by Alfred G Buckham and Alfred Stieglitz, which demonstrate how the technologies of photography and transport have evolved in tandem, each of them broadening our horizons and radically altering our perception of our ever-shrinking world.

The exhibition will include iconic photographs such as The Steerage, a career-defining image by the American photographer Alfred Stieglitz (1864-1946), made in 1907, while he was travelling to Europe by sea; and Inge Morath’s striking portrait Mrs Eveleigh Nash, The Mall, London (1953). Walking on the first-class deck, Stieglitz looked down into the third-class steerage area below him. Immediately struck by the strength of the composition created by the group of travellers gathered there, he quickly retrieved his camera, and captured the jarring class divide. Celebrated both for its modernist composition and its social commentary, the resulting photograph is one of the most recognisable images in the history of photography. Similarly, Morath (1923-2002), one of the first female photographers to work for renowned photo agency Magnum, used the door frame of an open-topped car to artfully divide her composition, suggesting the social gulf between the wealthy Mrs Nash and her chauffeur.

One of aerial photography’s pioneers was Alfred G Buckham (1879-1956) who took breath-taking photographs in the skies above Edinburgh. Just as fascinating as his photographs, are Buckham’s dare-devil techniques to capture the perfect shot. He gave this sage advice to budding aerial photographers: ‘It is essential to stand up, not only to make the exposures but to see what is coming along ahead. If one’s right leg is tied to the seat with a scarf or a piece of rope, it is possible to work in perfect security’. Buckham also pioneered early layering of multiple negatives to create the perfect shot giving his photographs an ethereal, otherworldly quality. 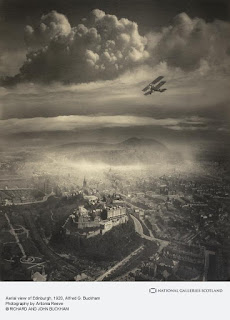 The Industrial Revolution led to the rapid expansion of the railways, which had a huge impact on the way that people lived and worked and led to the expansion of many towns and cities. As early as 1845, the railway line in Linlithgow was photographed by David Octavius Hill (1802-70) and Robert Adamson (1821-48), who travelled by train to document the main sights of the town.

The Forth Bridge was the longest bridge in the world when it opened in 1890 and it is now widely regarded as a symbol of Scottish innovation and cultural identity. Radical in style, materials and scale, it marked an important milestone in bridge design and construction during the period when railways came to dominate long-distance land travel. Evelyn George Carey (1858-1932), a young engineer working on the construction of the bridge, made an incredible series of photographs as the building work progressed. In one of these photographs Carey records the amusing sight of two men demonstrating the cantilever principle – resulting in the boy sitting at the centre of the ‘bridge’ being lifted into the air. This series of photographs inspired the German contemporary photographer Dieter Appelt (b.1935) to make Forth Bridge - Cinema. Metric Space – a photographic montage of 312 separate silver gelatine prints which together offer a beautiful, lyrical interpretation of an engineering masterpiece.

Another innovation explored in Planes, Trains and Automobiles is the Victorian phenomenon of the stereograph. Made of two nearly identical scenes, which when viewed together in a special device, create a single three-dimensional image; this new photographic technology essentially mimicked how we see the world. It sparked curiosity and encouraged the public to view images of far-flung places from the comfort of their own home. The natural association between travel and transport meant that modes of transport were one of the most popular themes for stereographs. This exhibition will feature over 100 stereographs from the National Galleries of Scotland’s collection in a dynamic wall display, alongside digital interpretations.

524 million journeys were made by public transport in Scotland last year and Planes, Trains and Automobiles explores this common form of travel. Photographers have been repeatedly drawn to the theme of commuting, fascinated by its ability to show humanity in movement, following regulated routes to work. Among these are documentary photographers Humphrey Spender (1910-2005) and Larry Herman (b.1942) who both made work observing Glasgow and Glasweigians on their daily commute.

From photographs of the iconic Forth Bridge to images of commuting, Planes, Trains and Automobiles is a photographic celebration of transportation in all its forms.

​Christopher Baker, Director, European and Scottish Art and Portraiture, National Galleries of Scotland, said: “This is the third in a hugely popular series of thematic exhibitions drawn entirely from the outstanding collection of photography held by the National Galleries of Scotland. The carefully selected photographs on display show how technology and transport have impacted on so many aspects of our lives and provided such a rich and thought-provoking focus for outstanding Scottish and international photographers, from very earliest days of the medium to today’s innovators.”

Find out more about the exhibition on the SNPG website