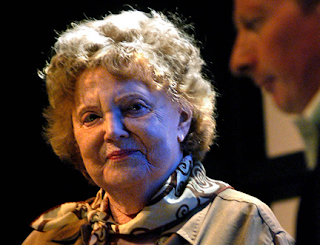 Muriel Spark’s only work written specifically for the stage, Doctors of Philosophy, is being performed as a rehearsed reading as part of the Edinburgh Book Festival...

The Edinburgh International Book Festival and Royal Lyceum Theatre Edinburgh have announced that the play will be presented in its entirety as a one-off rehearsed reading, edited by The Lyceum’s Artistic Director David Greig and directed by Marilyn Imrie, at the Book Festival in August.

Extracts from the play, which has not been performed on stage in the UK since 1962, were received with great enthusiasm when presented in collaboration between the Book Festival and the Lyceum in January to celebrate the centenary of Muriel Spark’s birth. Spark, who was born in Edinburgh and made her final visit to her home city in 2004 for an appearance at the Book Festival, was the author of 22 novels including the world renowned The Prime of Miss Jean Brodie. She was also a poet, playwright, essayist and literary critic whose work has influenced a generation of Scottish writers.

Nick Barley, Director of the Edinburgh International Book Festival, said “Doctors of Philosophy is an astonishing piece of theatre which demonstrates Muriel Spark at the peak of her powers and the audience response in January was extraordinary. We were extremely keen to bring the play in its entirety to the Book Festival and we are delighted that we have been able to continue our collaboration with The Lyceum to bring a full rehearsed reading of the play to Charlotte Square Gardens in August.”

David Greig said “We’re thrilled to present a full reading of Muriel Spark’s only play, Doctors of Philosophy, with the Book Festival. Spark’s play is a mixture of Pirandello, Wilde and Joe Orton for a largely female cast, and it’s all shot through with her own acid wit. Our taster presentation at the Usher Hall in February was a huge success, and this full length version promises to be an exciting revelation of a forgotten work.”

The rehearsed reading of Muriel Spark’s Doctors of Philosophy will take place on Sunday 19th August at 5.30pm in the The Spiegeltent in Charlotte Square Gardens.

Tickets, priced at £15 (£12) will be on sale through the Box Office at the Royal Lyceum Theatre Edinburgh on 0131 248 4848 or https://lyceum.org.uk/whats-on from tomorrow and through the Edinburgh International Book Festival Box Office from Tuesday 26th June 2018.

The full programme for the 2018 Edinburgh International Book Festival will be announced on Thursday 7th June 2018 and more information can be found at www.edbookfest.co.uk.