News - Michael Jackson: On the Wall 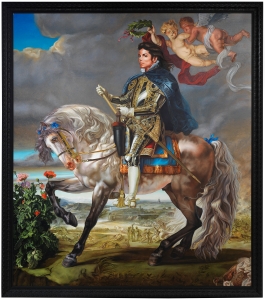 The final portrait of Michael Jackson by the artist Kehinde Wiley went on public display yesterday for the first time in the UK in a major new exhibition, Michael Jackson: On the Wall, at the National Portrait Gallery, London...

Curated by Dr Nicholas Cullinan, Director of the National Portrait Gallery, Michael Jackson: On the Wall examines how Michael Jackson has inspired some of the leading names in contemporary art, spanning several generations of artists across all media. Michael Jackson is one of the most influential cultural figures to come out of the 20th century and his legacy continues into the 21st century. His significance is widely acknowledged when it comes to music, music videos, dance, choreography and fashion, but his influence on contemporary art is an untold story as Michael Jackson has become the most depicted cultural figure in visual art by an extraordinary array of leading contemporary artists since Andy Warhol first used his image in 1982. For the first time, Michael Jackson: On the Wall will bring together the works of almost 50 of these artists, drawn from public and private collections around the world.

Kehinde Wiley’s portrait of Michael Jackson, Equestrian Portrait of King Philip II (Michael Jackson), 2010, was begun months before Jackson died and finished posthumously. The artist described collaborating with Jackson on the work as ‘extraordinary. His knowledge of art and art history was much more in-depth than I had imagined. He was talking about the difference between early and late Rubens’ brushwork. … One of the things we talked about was how clothing functions as armour. And if you look at the painting, he’s on horseback in full body armour.’

Wiley is known for his portraits of contemporary black sitters that draw on the visual vocabulary of European art history to question stereotypes about identity and representation. He was selected to paint the official portrait of former US President Barack Obama, which was unveiled at the Smithsonian National Portrait Gallery in Washington in February 2018. 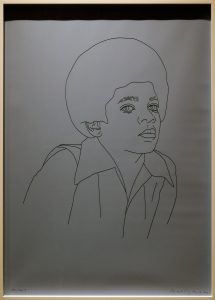 Other new works created for the exhibition include a line drawing by artist Michael Craig-Martin, based on the image used for the cover of Rolling Stone magazine in April 1971. Jackson was only 11 years old and the youngest person to ever be featured on the magazine cover. The portrait was completed in June 2018, just two weeks before the opening of the exhibition. Describing the work Michael Craig-Martin said: ‘This is an image of Michael Jackson as a child, already famous as a brilliant singer and performer, a beautiful little boy, unambiguously black, a child star, but a child whose subsequent life would become a sad and hopeless search for the childhood he never experienced.’ 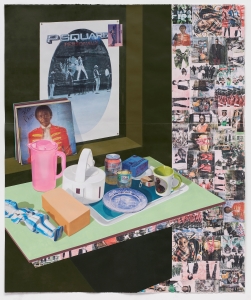 As We See You: Dreams of Jand, 2017 by Njideka Akunyili Crosby, also made for the exhibition, fuses collage, photo transfers, drawing and painting to depict an imaginary interior of a Nigerian home. Akunyili Crosby explains: ‘The piece is a snap shot of how we saw, consumed and revered images of things from Western culture – we aspired to be Michael Jackson. And that aspiration seemed, for the first time, to be within the realm of possibility: previously, all the international icons we’d known were white British or American stars. Therefore, MJ was particularly special because he was as cool—if not cooler—than the others and he was black!’ 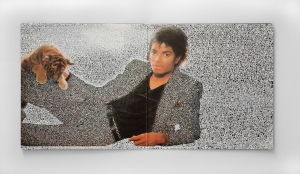 Artist Graham Dolphin has also created two new works, Thriller x 20 and Off the Wall x 25. The new works are part of an ongoing series of works by Dolphin, based on Michael Jackson album covers, which explore issues of fandom and idolatry. Using multiple copies of Thriller and Off the Wall as his canvas, the artist works directly onto their surfaces. Each cover is drawn over in small, handwritten text containing the complete lyrics of Jackson’s songbook.

A Michael Jackson Alphabet by British artist Donald Urquhart was also created especially for the exhibition and charts some of the key moments in Jackson’s life and career while Dara Birnbaum’s The Way You Make Me Feel comprises stills taken from Michael Jackson’s short film for his song of the same name and Yan Pei Ming’s large-scale painting In Memory of Michel Jackson based on a photograph from the early 1980s. 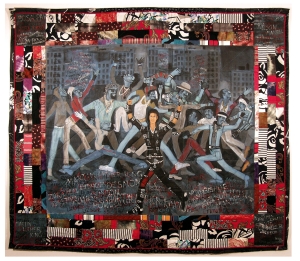 Other works going on display for the first time in the UK include American artist and activist Faith Ringgold’s story quilt Who’s Bad?,a series of collages by Isaac Julien made in 1984 and Jackson’s ‘dinner jacket’ covered with forks, spoons and knives made by costume designer Michael Lee Bush. Keith Haring’s pop-graffiti style portrait of Michael Jackson will also be exhibited for the first time in thirty years.

The exhibition curator, Dr Nicholas Cullinan, Director of the National Portrait Gallery, said “Michael Jackson: On the Wall takes an entirely new and quite radical approach by exploring the cultural impact of a unique figure through contemporary art. All the artists included - despite coming from different generations and parts of the world, and employing a range of media – are fascinated by what Jackson represented and what he invented. It is rare that there is something new to say about someone so famous, but here that is the case. The exhibition breaks new ground for the National Portrait Gallery in its subject matter and the breadth and profile of the artists who have been invited to participate. It will open up new avenues for thinking about art and identity, encourage new dialogues between artists and invite audiences interested in popular culture and music to engage with contemporary art. Like its subject, we hope this exhibition will be inclusive in appeal, uncompromising in artistic integrity and in the process break down barriers.”

Michael Jackson: On the Wall is produced with the co-operation of the Michael Jackson Estate and runs from 28 June – 21 October 2018 at the National Portrait Gallery, London www.npg.org.uk