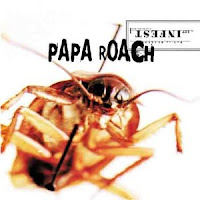 In an effort to further her musical education, Susan Omand has been set "homework" of listening to albums released after the 1980s that she has missed out on. This time it's Infest by Papa Roach...

OK. Papa Roach. What am I missing?

I’ve listened to this album three times now. Admittedly the first twice it was on as music while I did other stuff and the time passed without my concentration being pulled from the task at hand. The music never caused me to go up nor down, so I had to actually sit and listen to it the third time to make sure I gave the album enough attention to see why.

The intro to Infest, that increase in noise level that starts from an almost subliminal rumble, was incredible… but then it all kind of went meh. Don’t get me wrong, it’s ok music, it doesn’t annoy me, it just got a bit boring. You see, there’s nothing new or different in this album for me, nothing I haven’t heard done before and done better by other people – they struck me as Faith No More/Chilis wannabes. And then I thought about it. By the time Papa Roach started, as a group of high school kids, FNM and the Chilis had both been at the top of their game for 10 years or more. They were likely the bands that the kids from Papa Roach grew up listening to, so of course the music is going to be influenced by them. And Papa Roach have become the band that the next generation are growing up listening to because those kids’ parents grew up listening to FNM and the Chilis so, obviously, the kids have to hate those bands but sometimes they still like the music. And Papa Roach can fill that gap for them without being uncool.

So, I guess, I have to admit it – I’m too old for Papa Roach. Which, considering the album Infest came out 18 years ago, is a hard lesson to take on board.