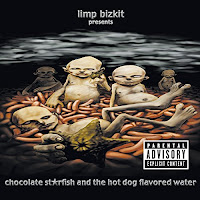 In an effort to further her musical education, Susan Omand has been set "homework" of listening to albums released after the 1980s that she has missed out on. This time she applies some scientific rigour to Limp Bizkit...

Limp Biscuit? That’s what happens when you leave your digestive dunked in your tea for too long isn’t it? No? Well, I guess I can scrap my detailed report on experimentation conducted with the aforementioned limp biscuit issue, which came up with the optimum dunking time of 3.5 seconds (assuming McVities and a freshly boiled kettle, tea brewed in the mug with just a dash of milk) to maintain biscuit integrity while still allowing maximum tea influx. Science is a serious thing folks.

Anyhow. Limp Bizkit. with a zk. First things first - the album title. Yes, I know what it refers to and that it’s meant to shock and/or revolt but it’s such a cute way of phrasing it, isn’t it? So, let’s see if the songs are just as clever and take it track by track for a change with notes written on my first listen through.

Intro – to paraphrase the Sound of Music, “a very good place to start.” And I certainly wasn’t expecting it to sound like this! Very cool 90’s club electronica with a synthesised voice and a dance beat.

Hot Dog – Ohhhh this is good. Take the Knight Rider theme tune and give it a catchy rap twist and 46 (yes I counted them, because the lyrics mentioned the number and I had to check) mentions of the F word and you have the start of Hot Dog. It gets a lot heavier as it goes on and Fred Durst’s vocals are still intelligible so all is good.

My Generation – surprisingly NOT a cover of The Who’s 1965 classic (although now I want to hear them do that). This is amazingly musical. There is so much going on, from the tribal drums to the superb distorted guitars and record scratch mix that sits below the lyrics.

Full Nelson – “Why is everybody always pickin’ on me” as the first line made me smile because the phrase is from a very old song by The Coasters (Charlie Brown) but that’s by the way. The rest of the song sounds like the Beastie Boys have invaded a recording by The Orb and it really really works. Also those drums at the end!

My Way – again, surprisingly, not a cover (the Sex Pistols did the best cover of the Sinatra classic btw) but this could well be my favourite track. Very nice tempo change about 2 minutes in and a great use of arpeggio constructs in the main melody. Further investigation has turned up the existence of a William Orbit remix which my inner nightclubber really wants to hear.

Rollin’ [Air raid vehicle] – I recognise the chorus of this! I guess that figures as it’s probably the only part of the record they would be allowed to play on the radio as this was a chart topping single back in the day. IMHO it’s probably one of the weaker tracks on the album though, probably because of its over-generalised commercial appeal.

Livin’ it Up – Loving the Eagles sample in this! Before I had heard this track, I thought My Way was my favourite but this edges it. It’s incredibly intricate with almost jazz-like drums layering under the sample with yet another time signature in the vocals. It’s also got an outstanding rebuild after the middle eight. A superb track.

The One – how 80’s is this?! All it needs is Mark King’s slap bass. It really showcases Durst’s voice too. The ending goes a bit Neil from the Young Ones but still very good.

Getcha Groove On – apart from sounding like they’re rapping while playing a game of Pong, this is still a very interesting song, giving precedence to the sound of the lyrics rather than conventional melody

Take a Look Around – Your mission, should you choose to accept it, is not to think of the Mission Impossible theme, which is beautifully sampled into this song. Especially good through headphones as the backline kicks up a gear and it starts to reverb. (this paragraph will self-destruct in 5 seconds)

It’ll Be OK – WOW! This intro gives me the shivers. It’s so early Cult-ish. It settles back into their own sound a bit by the chorus and I love the recurring diatonic motif throughout.

Boiler – again a lyrical rhythm rather than a melody, the use of instrumental and vocal atonal “noises” to build an almost industrial soundscape behind the main rap is brilliant, fading to the naturalistic, almost rain-like guitar at the end before the hypnotic ambient interlude.

Hold On – the vocal harmonies are beautiful in this one. It’s very Jethro Tull (but this is a good thing) – very 70’s prog rock. I kept waiting for it to be spoiled by throwing a modern hard rock bassline in there but it held true to the genre and is an unexpected and truly amazing tapestry of a song because of that.

Rollin’ [Urban Assault Vehicle] – apparently redone with different guest artists, I don’t think it added much to my comments on the original version of the track above. It’s very commercial chart rap and a bit ho hum.

Outro – the synthesised voice from the intro returns along with a marvellously distorted electronic sound to really chill out to. The ad-hoc mickey-taking chat and manic laughter is very cool and makes a perfect ending to the album so that we don’t end up taking it all too seriously. Limpin’ with the Bizkit!

OK you really can consider me educated this time. I’m a huge rap fan, I hadn't heard this before and I love this album! It’s musically complex, lyrically clever, rhythmically challenging. It’s everything I didn’t expect from my pre-conceptions of Limp Bizkit which seemed to forget (or not know) that they were primarily a sample-led trance-based rap band. Definitely one I’ll listen to again.