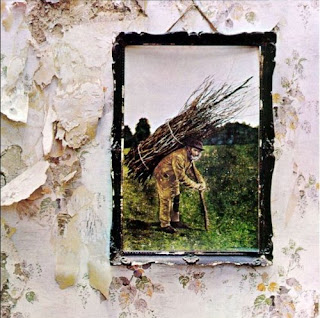 David Ames digs through his music collection to count down his top ten favourite albums in a specific music genre. This time, he salutes those about to rock and at #8 it's Led Zeppelin's IV...

This album is my childhood. My father would listen to the album constantly when I was younger. It was the first Zeppelin album I purchased on my own. It was the first Zeppelin album that I learned on guitar. It was the first Zeppelin album that made me fully realize the true genius that WAS this landmark band. That isn’t to say that their other albums aren’t good or even better than IV. In fact, many would argue that there are far more superior Zeppelin albums, but for me and my experience, IV is the first to really inspire me. Obviously “Stairway to Heaven” is an incredibly important song but the album also has “Black Dog,” “Rock and Roll,” and “Going to California” as well as my favorite Zeppelin song, the percussion-driven, blues-heavy “When the Levee Breaks.” This album is everything that made Led Zeppelin so important: It is heavy, it is mellow, it captures the Zeitgeist of the late 60s and early 70s. This album ROCKS in every sense of the word and if you haven’t listened to it before, or in a long while, it’s about time to dust it off, crank it up, and listen to four of the most influential musicians in history, both individually and together.

“When the Levee Breaks”