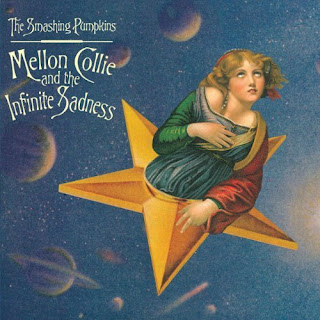 David Ames digs through his music collection to count down his top ten favourite albums in a specific music genre. This time, he salutes those about to rock and at #6 it's Smashing Pumpkins with Mellon Collie and the Infinite Sadness...

Few bands from the 90s have the diversity in theatricality and musical variety than the Smashing Pumpkins. This was another band that Scot showed me and I have to admit, at first I wasn’t sure what to make of them. I enjoyed the music but the vocals were a little strange. Even so, Siamese Dream (their second release) gained some heavy rotation in my cd player years after its initial release. Then, in 1995, as my musical awakening was beginning, Smashing Pumpkins dropped a massive double-album called Mellon Collie and the Infinite Sadness, with music heavily featuring strings. The album feels like the soundtrack to a Steampunk paradise somewhere in the annals of time where Billy Corgan’s haunting vocals stream out of speakers on every street corner. This album’s scope is impressive. If you have ever heard of the Smashing Pumpkins, you are aware of the songs on this album. From the beautiful “Tonight, Tonight” to the angry and rage-filled “Bullet with Butterfly Wings” this album spans almost all musical genres and deserves a listen if for nothing else than to marvel at the sheer scope and presence of the album and the genius therein.