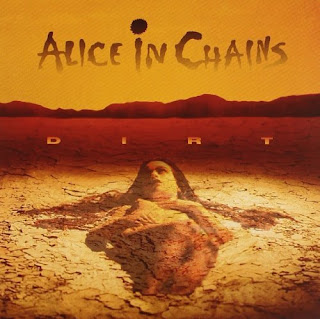 David Ames digs through his music collection to count down his top ten favourite albums in a specific music genre. This time, he salutes those about to rock and at #3 it's Dirt by Alice in Chains...

Alice in Chains was another one of those bands that emerged during my musical awakening. They were borderline metal, although lumped into the grunge movement, and had arguably one of the greatest singers, not only of his time but of all time, in Layne Staley. Dirt, their second album, is a mature growth from Facelift, their first album. Not only are the songs better, the production quality is spectacular and the music is much more personal, dealing with anything from Jerry Cantrell’s father during the Vietnam War to Layne Staley’s deepening struggle with heroin. This album is also where they developed the guitar sound that Cantrell would eventually become known for. Not so much tone as much as density. On this album, Cantrell developed basically a wall of guitars that sounds so incredibly powerful and huge that everything lays overtop perfectly to create an immense sound. Alice in Chains was one of the bands that my first band played a ton. I think we learned somewhere around 7 or 8 songs and played them regularly. To this day I can still hear our singer’s sister screeching “ROOSTER” at the top of her lungs at damn near every show we played. Check this album out again to enjoy that classic early 90s sound that is so recognizable even today.

“Rain When I Die”