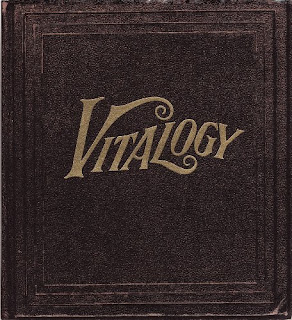 David Ames digs through his music collection to count down his top ten favourite albums in a specific music genre. This time, he salutes those about to rock and at #2 it's Pearl Jam's Vitalogy...

Pearl Jam is still one of my all-time favorite bands and they will forever remain there, if for nothing more than the fact that Eddie Vedder is, in my estimation, the greatest lyricist of all time. If you haven’t noticed a trend, the Seattle scene had a huge impact on my music tastes and still does today. There are so many albums to choose from when it comes to Pearl Jam, especially their first two (Ten and Vs.), but Vitalogy was just weird and resonant enough to still get regular play in my car, on my phone, on my iPod, and any other venue where I listen to music. It has a heavy punk feel while still retaining some of that great bluesy tone that made Pearl Jam famous in the first place. Vedder is in top form, as are guitarists Mike McCready and Stone Gossard, bassist Jeff Ament, and Dave Ambruzzese. The album has some of Vedder’s most poignant lyrics and a good mix of heavy and mellow songs. Also, the album ends on a track of a person with schizophrenia rambling with some subtle music attached. The whole album is an art piece but a hugely successful one.