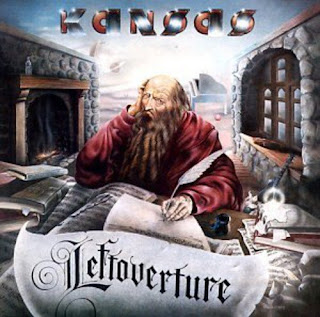 David Ames digs through his music collection to count down his top ten favourite albums in a specific music genre. This time, he salutes those about to rock and at #10 it's Kansas with Leftoverture...

I had to begin this list with an album that I remember fondly from my childhood. I know that my dad mainly listened to the radio and “Carry On Wayward Son” was played pretty regularly back then. It’s still played in heavy rotation even today and it always elicits the same memory for me: I was 7 or 8 and I was riding in the front seat of my dad’s car. The windows were rolled down and the music was blaring and I had my hand out the window making waves in the air. My dad and I sang the soaring chorus of that song together. Memories like these are why this album is so important to me. They helped to shape my future musical tastes. When I reached high school, I bought the album in its entirety and was treated to a classic rock masterpiece, especially the 8+ minute, six-part epic known as “Magnum Opus.” If you like classic rock, especially that wonderful blend of guitar, keyboard, and vocals that only the 70s could produce, Leftoverture is a must-listen album.