Turn That Noise Down - A-Ha 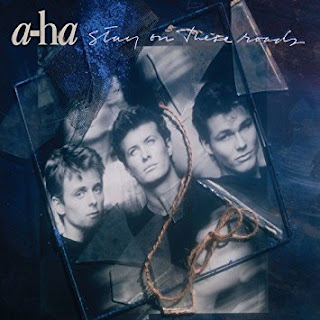 So many well-known albums turn 30 this year and Steve Taylor-Bryant and Susan Omand travel back to 1988 to revisit some of the sounds of their youth that made parents shout "Turn that noise down!" This week Steve remembers Stay on These Roads...

I’ve never kept my love of A-Ha secret. Some music from my childhood is, as is everyone’s, cringeworthy and terrible and I wouldn’t admit to liking it in such a public forum, my love for Austrian band Opus is between me and my therapist, but I’m not ashamed of my affection for A-Ha. Whilst I’ll always hold up Scoundrel Days as their most perfect album there aren’t many weak releases and Stay on These Roads is pretty strong, giving life to six singles from its ten tracks.

Kicking off with the title track the album starts strong. Stay on These Roads is a sad and emotional song to listen to if your interpretation is the same as mine, an older man watching his love die, but I do see the darkness in everything. However you interpret the song it is lyrically beautiful, musically elegant which isn’t something often said about ‘80s synth music, and will affect you in some way. Next up is The Blood That Moves the Body which is dark. I mean Scandinavian night-time dark, references to teenage suicide and Marquez’s Eyes of a Blue Dog are hidden within such a catchy song you don’t realise how dark the content is until you finish dancing, very clever. Very clever indeed. Track three sees the only song I can’t really stand, Touchy. Maybe because it’s so overplayed on ‘80s radio or in supermarkets, but it’s like being a Billy Joel fan and everywhere you go you only hear Uptown Girl.

This Alone is Love is stunning, Morten’s vocals are hypnotic, the music is beautiful especially with the punctuation of guitar on occasion but I can’t help thinking that maybe if it had been a female vocalist at the time, Alison Moyet maybe, it would have been a bigger song. I love Hurry Home, the beginning reminds of a film soundtrack, and the mid 8 pleases. The Living Daylights is one of the best Bond songs from one of the best Bond films, don’t @ me you’re embarrassing yourself. Perfect timing for both band and Bond.

There’s Never a Forever Thing is a beautiful ballad, the pan pipes add an element to the music and the acoustic guitar underneath the piano and synth is subtle but effective, with Morten Harket showing his incredible range, this is followed by Out of Blue Comes Green which is one of the best songs on the album. A lyric which resonates, great musicianship by Magne Furuholmen and Paul Waaktaar-Savoy, a bigger sound compared to previous tracks. Magnificent!

The album ends with You Are the One and You’ll End up Crying. You Are the One is my karaoke track when I’m blind drunk, it’s a glorious orgy of ‘80s sounds with a vocal that perfectly shows how Morten Harket can abuse a scale with ease. Add in that very ‘80s brass, deep running synth and electronic drum sound and you have a perfect snapshot of why children of my generation loved the 1980’s. You’ll End up Crying with its mariachi intro and overlaid vocals is a different sound for the band but that doesn’t mean it’s not worthy of a place on the album. You will love it or you will hate it.

Lots of Stay on These Roads sounds dated, it doesn’t quite hold up 30 years later like maybe Scoundrel Days does, but my word I enjoyed this album's darkness. At the time I was 13, I liked the music, I dressed like Morten Harket but I didn’t fully understand or appreciate the depth of a piece of music or a lyric. Don’t dismiss an A-Ha album because you remember them being a pop band, there are more layers of intrigue to the music and songwriting than there is layers of synthesisers. It’s not Scoundrel Days but it is a wonderful listening experience.