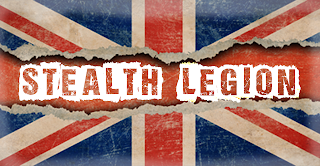 Steve Taylor-Bryant escapes from the office and heads to the other office (the pub) to watch the rock covers band Stealth Legion...

I don’t normally review cover acts in local pubs. It’s not that they aren’t good, trust me I drummed in a few and made a living, it’s that there’s loads and, let’s face it, not all of them deserve global exposure. Tonight is different. I’m in a bikers pub called Scallys in Weston Super Mare, a great venue if you can see past the word biker. I played here in 1993. I was drumming for an originals band called March of Time. My bass player at the time was a dude. But, in my quarter of a century relationship with Adrian Ford, the bassist in question, I’ve never seen him play live from the audience side of a drum kit. This should be fun. Bring on Stealth Legion!

The band begin a set of some real rock classics with volume and energy. From Tie Your Mother Down through I Fought The Law and Royal Blood’s Figure It Out you know you are in for a real treat, the party mood has started and the band aren’t going to let it slip away. The first set carries on with some crowd favourites like Rebel Yell and Anarchy in the U.K and ends with a trio of personal loves in American Idiot, Pyscho, and Whole Lot of Rosie. A well deserved break in the sweltering heat of a bank holiday weekend evening leads to a second set that shows no signs of any let up in pace and class. Older songs Babylon’s Burning, You Really Got Me, and Should I Stay or Should I Go show a band steeped in a beautiful era for music but the biggest and most pleasing elements of the entire gig for me are the inclusion of some more modern songs I don’t often hear covered. All The Small Things and Dakota are fantastically played and a hit with the crowd, but Slither from Velvet Revolver is what hits my sweet spot. I am a huge fan of VR and rarely do I see any of their catalogue covered by anyone. Bravo boys.

Stealth Legion were excellent. There are some years on the clock with some of the members; I mean no offence by that but I think it’s important. There is a tightness and quality of professionalism that you don’t get with younger bands which allows them to play with the enthusiasm of a teenage garage group without ever dropping a beat. I thoroughly enjoyed my audience experience, I didn’t find a weak song in either set, I was bowled over by the energy of the performance, and having spoken to the various members throughout the evening I can tell you they are really nice guys whose enthusiasm for what they do isn’t an act, it’s not something they switch on when they get on stage they are living their experience.

If you get the chance to catch Stealth Legion live I implore you to do so.