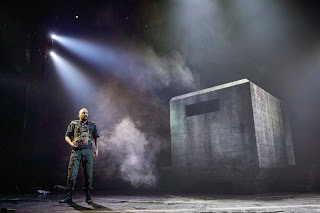 Sleep no more as Tony Cross watched the National Theatre production of Macbeth at the Olivier Theatre...

This production has been given something of a kicking by critics. I also know of at least one person who walked out as they thought it was so awful. So, naturally I really enjoyed it. I don’t know if this reflects a bloody-minded refusal to be swayed by the mainstream or an utter lack of critical awareness. Perhaps both. Perhaps neither.

This Macbeth seems to be set in a post-apocalyptic future Scotland. Perhaps it is just me, but I feel that post-apocalyptic settings for Shakespearean tragedies seems a bit unimaginative. I’ve seen five productions of Macbeth and I’ve yet to see one set in mediaeval Scotland. It might make a refreshing change. I was, however, thankfully that they weren’t wielding guns.

However, I have – as the regular reader of my reviews will have noticed – been suggesting that there is room for a ‘horror’ Macbeth and this production does try to do this. The Witches are genuinely creepy and strange, accompanied by a soundscape that wouldn’t be remiss in an early-60s Doctor Who production courtesy of the BBC Radiophonic Workshop. So, for me it started off better than I expected. And perhaps my expectations – based not on specific reviews but on the general vibe surrounding this production – were so low that they could only have been met by a genuine theatrical disaster.

It isn’t particularly poetic. The actors are wrapped in prose not poetry, but the performances are generally strong.

I’ll be honest and say that I don’t think Rory Kinnear’s Macbeth is his finest hour, but he does well enough and I really liked the way he delivered the ‘tomorrow and tomorrow’ speech. I also liked how this was directed. His performance is also put a little in the shade by the magnificent Anne-Marie Duff as Lady Macbeth. She is, perhaps unintentionally, the centre of this production. Her take on the ‘Out Damn Spot’ speech was so strong. The scream utterly broke me. I’d forgive this production of Macbeth all its faults just for Anne-Marie Duff. 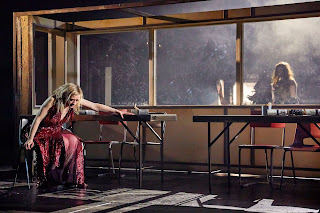 The director, Rufus Norris, cuts bits of the text and you know I didn’t really care because he didn’t cut anything that I really missed. Thankfully, he cut that long speech where Malcolm, meeting with Macduff in England, decides to – basically – wind Macduff up about how terrible a King he, Malcolm, will be because he’s a sex mad greedy bastard. Then, just as Macduff is about to walk away, Malcolm goes, “actually that’s all bollocks. Anyway…” I think if I were Macduff I’d probably have given up at that point. So, cutting that is good.

I also felt that whilst Norris didn’t take a directorial hammer to a nut. He obviously wants to say something with this version of Macbeth but he doesn’t need to turn it into a lecture to do so. What needs to be said is said in the words and the performances.

Norris kept the Porter, which is good. I like the Porter scene. And Trevor Fox is the perfect actor for the part. He was a fine Trinculo in a production of the Tempest I saw at the Globe back in 2013 (if memory serves.) I’ve seen two Macbeths in recent months – this one and the Ecclestone RSC one (review here) – and the Porter was well-served in both. I expect the next production I see will cut him out entirely.

There are other good performances: Patrick O’Kane as MacDuff carries off his ‘all my pretty ones’ grief with panache, Amaka Okafor as Lady MacDuff, Parth Thakerer as Malcolm and Kevin Harvey as Banquo are all fine. There’s nothing wrong with the performances in my opinion, except that they’re all put slightly in the shade by the brilliance of Anne-Marie Duff. If everyone had been as good as her this would have been a production well-worth seeing.

So, I really enjoyed it. Which shows something I suppose. It shows nothing but the need to see things for oneself rather than assuming things are good or bad unseen. That’s obviously hard to do with theatre. It’s an expensive thing to see. Time is finite. I miss a lot of things I’d love to see because I don’t have the money. I wish I could go to more, but this production reminded me of one thing that regardless of how a play is in general the theatre has an emotional grip on me that films don’t always have. There are three screams or cries that I will remember always that I have heard in the theatre because they seemed to come from the darkest and most broken part of a person’s soul, even though they were actors. One of those was from Imelda Staunton as Martha in a recent production of ‘Who’s Afraid of Virginia Woolf’, one was from Kate Fleetwood as Lady Macbeth in Rupert Goold’s production starring Patrick Stewart and the third came from Anne Marie Duff here. Also, as Lady Macbeth.

For that moment alone, I’d have gone to see this production.

Make of that what you will.

Macbeth is on at the Olivier Theatre until 23rd June and will tour the UK and Ireland from September. Find out more and book tickets on The National Theatre website.