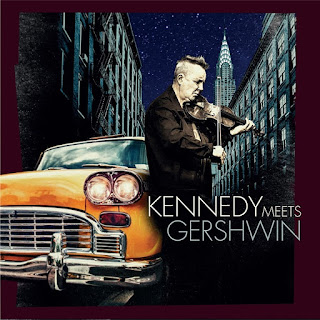 I hadn’t realised quite how much of a Gershwin purist I was until Nigel Kennedy messed with Rhapsody in Blue for the first track on his new album Kennedy Meets Gershwin. I mean, yeah ok, he was always going to put his own spin on things, this is the one-time rebellious wild child Nigel Kennedy after all. And, ha ha, nice touch renaming it to Rhapsody in Claret and Blue to reflect the team colours of his beloved Aston Villa. Don’t get me wrong, I really like Mr Kennedy’s work, he is a virtuoso classical violinist who has evolved into an equally impressive jazz musician BUT you do NOT mess with that spine shivering glissando slide at the start of Rhapsody in Blue, no matter who you are or what instrument you’re playing! I was so annoyed that I nearly switched the whole thing off there and then. However, albeit spitting feathers and mumbling about the utter cheek of it all, I decided that, for the sake of the review if nothing else, I should probably listen to the rest of the album before going off on a full-on rant, just in case.

And, once I’d got over my initial indignation, I have to admit that this is actually an exceptional jazz album. Many of the Gershwin standards are here, like The Man I Love, Porgy & Bess and They Can’t Take That Away From Me, although they’ve all had “the Kennedy treatment” so don’t expect them to sound at all like you assume they will. You can, though, really hear the influence of his mentor, the inimitable Stephane Grappelli, as Kennedy’s violin fleetingly connects with the track of the original melodies in the same way that a boisterous spaniel crosses the path on a forest walk… dashing off in a completely different direction barking joyfully at nothing in particular, coming back every now and then, covered in mud and bracken and goodness knows all what, to check you’re still there before bounding of on another entirely random route to disappear into the trees once again, but still managing to reach the carpark at the end of the walk just at the same time as you do. His interpretation of Summertime, although very VERY far from the original path, is gob-smackingly good and Fantasy is ten solid minutes of meandering music that is clever, complex and cool.