Review - The Impossible to Pick Up EP 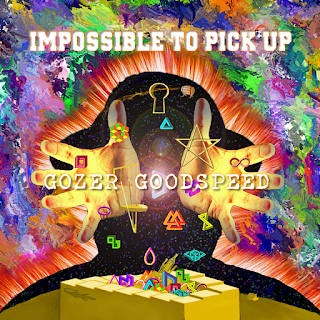 Steve Taylor-Bryant picks up the Impossible to Pick Up EP, out soon from Gozer Goodspeed...

I really like Gozer Goodspeed, as a person as well as a musician, and have championed his previous releases here without a second thought. At some point though you have to grow as a reviewer, perhaps get a little tougher in your commentary, and a musician has to grow as a performer, and by your third release, things should be falling into place and you as a listener should know where the performer is going in the future. I say this because I really enjoyed The Impossible to Pick Up EP, but it isn’t without some flaws, and some of the growth is outstanding, so I am not sure where as a fan we go from here. Hopefully I’ll explain this better later.

The EP kicks off with the titular track, Impossible to Pick Up, and has that familiar 1960’s mixed with a western feel that I have enjoyed from the previous records, I’m always welcoming to something that has a bit of The Doors vibe, but… is it different enough to what has come before? Maybe not. If you put all three EP’s together as one record I doubt this track would be more than filler, possibly a ‘B’ side to a single, but from an opening track maybe I expected more (despite the closing track quite literally telling me to keep my expectations low). It’s a great little tune, very familiar to those of us that admire Gozer Goodspeed’s style, I just maybe wouldn’t have opened the record with it. However, we then come to the second track, Survivor by Habit, and I can honestly state that this is the best song Gozer Goodspeed has ever done. Let’s start with what I found most pleasing… THERE'S DRUMS AND PERCUSSION ON IT! He listened, now I’m obviously not claiming credit for the extended instrumentation that is here, but I have said on both previous reviews (here and here) that that Gozer Goodspeed needs to be fronting a band and Survivor by Habit just proves my point. Its lyrically as great as Goodspeed’s other songs normally are, and vocally he’s brilliant, I especially love the slight vocal style change at the chorus, but what I’m most impressed with is that ‘whole band’ feel. I don’t say these things as a drummer that wishes there was drums on everything, but as a fan of an artist I can see things that I think can make stuff better, and with the added percussion and layers of non-guitar instruments the entire song just seems to be massively elevated above anything I’ve heard before. More like this please!

Then I contradict myself as we arrive at track three, The Key Broke Off Clean in the Lock, as Gozer Goodspeed does great ballads. It's musically and vocally very interesting and, when there is the slight increase in gravitas around the chorus, I think it is a choir away from a perfect song. Listen to this track, then listen to it again and imagine Goodspeed on a large stage with a huge choir singing that chorus with him and you’ll get chills I promise. Track four is Keep Your Expectations Low but you shouldn’t, it is up there with Survivor by Habit as one of his best. It is another tune though with more of a whole band feel and I really hope this musical journey he’s on with this recording continues.

The flaws I mentioned at the top are minimal, if you move the title track to position two it probably isn’t as bad as I’ve made out, I just think having the title track open a record and then not living up to that billing is sad, but there are huge growth moments throughout the EP and the added depths and layers that more instruments and percussion bring really do add to the sound immensely. Gozer Goodspeed the recording artist and nice guy is great, Gozer Goodspeed the songwriter and frontman of The Gozer Goodspeed Band is better. The EP is well worth a listen, as are the two previous releases, but I really do have expectations now. They are huge expectations as well, but since Gozer seems to excel in surprising me, let's hope he meets them. It's time now for a full album with more of a whole band feel, and maybe a choir.

The Impossible to Pick Up EP is available from 8th June.