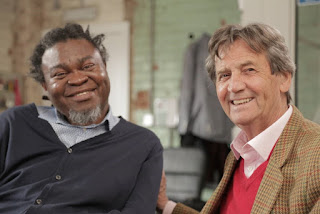 A host of outstanding performers, artists, musicians, authors and films have been nominated for The South Bank Sky Arts Awards 2018. Susan Omand picks her winners...

Now in its 22nd year, The South Bank Sky Arts Awards is the only awards ceremony in the world to represent the entire spectrum of the arts, with categories for TV Drama, Classical Music, Theatre, Comedy, Dance, Film, Visual Art, Pop, Literature and Opera and this year there are so many strong nominations.

Christopher Nolan’s war epic Dunkirk is nominated in the Film category, but is up against Paddington 2 and independent filmmaking success Lady Macbeth. Meanwhile, Olivier Award-winning productions The Ferryman and Follies are nominated in the Theatre category alongside The Jungle, while Dua Lipa, Stormzy and Loyle Carner battle it out in the Pop category. The TV Drama category pitches Line of Duty against period pieces The Crown and Howards End.

The celebration also includes The Times Breakthrough Award, recognising achievements made by newcomers across the full range of the arts; previous winners include Amma Asante, Tom Hiddleston, Billie Piper and Sheku Kanneh-Mason, so these are important footprints to follow in.

The event's host, Melvyn Bragg said, “The Creative Industries generate £92 billion a year, and yet the funding cuts in the arts in schools are very worrying. A recent study of 1,200 secondary schools found that 90% had cut back on arts teachers, facilities and equipment. Since 2010, there has been a 28% drop in pupils taking arts GCSEs, with a corresponding drop in the number of arts teachers being trained. This means that the future of everything we stand for and everything we’re good at is being threatened. But what we also stand for are events like these awards, which show how rich and diverse the arts in this country are.”

Phil Edgar-Jones, director of Sky Arts, added “With funding for the arts and arts education facing challenging times, Sky Arts’ work supporting artists and the creative industries is more important than ever. We are proud to host The South Bank Sky Arts Awards which reflect the breadth and diversity of talent and voices in the creative industries.”

Artist Yinka Shonibare MBE, Fellow of the Royal Academy, has been commissioned to design this year’s award, which he describes as an expression of how he supports the importance of the Arts as they remain of value to our humanity.

The Outstanding Achievement Award for this year, presented for continued excellence in British culture, will be announced closer to the ceremony, which will be held at The Savoy Hotel in London on Sunday 1st July 2018, and will be broadcast on Sky Arts later in the week.

Susan Omand had a look at the Full List of Nominees below. See who she thinks should win.

Mat Collinshaw pushed the boundaries of art in new and innovative ways by restaging (and resoundscaping) one of the earliest exhibitions of photography in 1839 by William Fox Talbot, using the medium of VR. Letting the past inform the future, and creating something totally unique from it, is the way forward.

I'm afraid this one is just an informed guess as I have never seen any of the shows in question but have heard the best reports about This Country so will go with that.

Going old-school with this one because you just can't beat a bit of West End Sondheim.

I know, shock horror, betting against the Christopher Nolan epic but the beauty and brave story telling of Lady Macbeth on an indie budget is quite stunning.

AAARGH a difficult one because the Royal Ballet's Flight Pattern is such a powerful contender (and probably will win tbh) but it's The Rite of Spring so I can't not go for it.

Schoenberg is always a winner but the other reason I'm picking this one is because Oedipe is technically an Opera and This is Rattle was a 10 day event of so many different classical performances that Gurrelieder is the only "single" purely classical music piece on this list.

Although, sadly, not written by the ex Scotland Football manager, my vote goes to Craig Brown's biography of Princess Margaret as a very good factual read.

Another toughie! Hamlet is one of my favourite Shakespearean operatic adaptations but Scottish Opera are so good but Benjamin Britten's Albert Herring is so seldom seen it really deserves the plaudits.

Yeah... another category where I've heard of the nominees but not really listened to anything much by them. From what I have heard though, Loyle Carner edges ahead of the others.

It seems an odd mix to put a modern, gritty police procedural up against two essentially period dramas but that's the beauty of nominations. My money this time is on The Crown, because of the inspired casting choices throughout the whole run. I mean, Matt Smith as the Duke of Edinburgh? Perfect!

A superb and eclectic list. Nubya Garcia is a strong contender (a superb jazz saxophonist although not really pop) and Alex Lawthor and Monica Dolan, although still young, have been in so many great things, while Francis Lee's direction will continue going from strength to strength. Heather Agyepong's artwork aims to intrigue and inform rather than entertain and Imogen Hermes Gower words resonate if historical is your genre. But my top 3 (in reverse order) is as follows:

There's never enough credit given to conductors. They are more than metronomes and can imbue an orchestra with a level of precision and passion that can make a piece of music just come alive. The fact that I cannot find lots of video footage of Oliver Zeffman at work tells me that he, more than anyone else, deserves this award because the conductor really needs to be a much more heralded job in the orchestra and Zeffman is going to be immense. Watch this - from Classic FM a few months ago.