Royal Mail have revealed images of six stamps being issued to mark the 250th anniversary of the world renowned Royal Academy of Arts...

The designs, all specially commissioned artworks, depict the artists’ reflection on their works and the RA’s most famous exhibition - the Summer Exhibition. To mark the momentous occasion of the 250th Summer Exhibition will be co-ordinated by Grayson Perry and opens to the public on 12th June.

Open to everyone, the Summer Exhibition includes works in a variety of media and genres and is arguably “the only exhibition where some of the world’s greatest artists show alongside amateurs”, according to the RA’s Artistic Director Tim Marlow. Thousands of entries are received, from which over 1,000 artworks are selected and hung by the Royal Academicians.

An independent body, the RA was founded in 1768, with a mission to promote the enjoyment and appreciation of the visual arts and give a platform for artists.

As stipulated 250 years ago, the RA is still led by many of the greatest artists and architects. Known as Royal Academicians, they lead the Academy today including the direction of the exhibition programme and the RA Schools.

Royal Academicians number a maximum of 80 at any one time. Potential members – artists or architects who are professionally active in the UK and aged under 75 – must be nominated by an Academician. The candidate’s name is written in the weighty Nominations Book and awaits signatures from eight supportive RAs. A traditional ceremony welcomes the newly elected, and during it they sign the historic Roll of Obligation. Each RA donates a Diploma Work to the Collection and becomes a Senior Academician at the age of 75.

Royal Mail spokesperson Philip Parker says: “To mark this landmark anniversary, Royal Mail commissioned six Royal Academicians to create original works for stamps. We are delighted with the range and creativity of these wonderful miniature works of art.”

As well as the traditional First Day covers, there are presentation packs, with information about the Royal Academy written by Art critic and Senior Lecturer Dr Gilda Williams. Some of the stamps are also available in a larger size as limited edition signed framed prints. 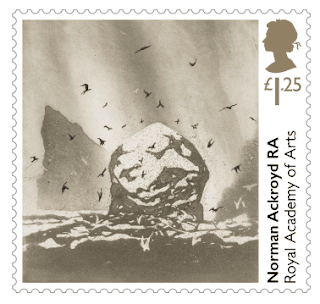 Leeds born Norman Ackroyd CBE is an artist and printmaker who has been a Royal Academician for 30 years. He was appointed Professor of Etching at the University of Arts in 1994 and elected Senior Fellow at the Royal College of Art in 2000. His work can be found in several British and American galleries including the Zillah BellGallery, the Tate, the British Museum and the National Gallery of Art, Washington. He has also appeared in several television programmes, the most recent being a feature in an episode of BBC’s Countryfile in 2017. His stamp is entitled St Kilda: The Great Sea Stacs. 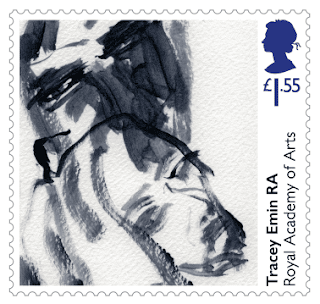 Tracey Emin CBE is renowned for her autobiographical, confessional and often candid art, working with a variety of media including drawing, painting, sculpture, needlework, film and photography. Born in Croydon in 1963, she studied fashion at the Medway College of Design and later printing at Maidstone Art College before obtaining a Master of Arts in painting at the Royal College of Art in London. She became a Royal Academician in 2007 and in December 2011 she was appointed Professor of Drawing at the Royal Academy, being one of the first two female RA Professors along with Fiona Rae. She has exhibited and given lectures extensively throughout the world and is a Turner Prize nominee. Her stamp is entitled Saying Goodbye. 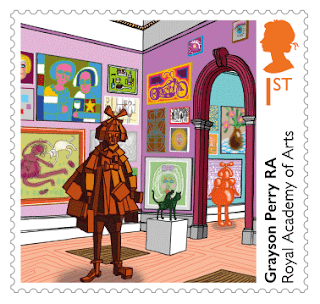 Grayson Perry CBE is particularly renowned for his ceramic vases but also works with printmaking, drawing and tapestry. He is an astute commentator on contemporary society and culture and there are often autobiographical elements in his work with images of his female alter-ego, Claire. He was born in Essex and did an art foundation course at Braintree College of Further Education before graduating with a Batchelor of Arts Fine Art degree from Portsmouth in 1982. He has written several books as well as prize-winning TV documentaries and was awarded the Turner Prize in 2003. His work is held in the collections of the Tate, Arts Council, Victoria & Albert Museum among others. His stamp is entitled Summer Exhibition. 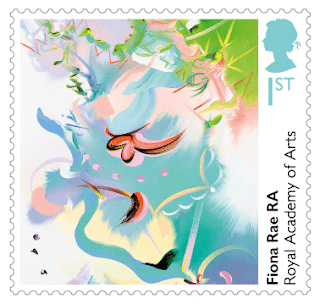 Hong Kong-born artist Fiona Rae has developed a distinctive style of work over the past 25 years, which is full of restless energy, humour and complexity and which has set out to challenge and expand the modern conventions of painting. She studied Foundation at the Croydon College of Art before gaining a BA Honours in Fine Art at Goldsmiths College in 1987. She has been shortlisted for the Turner Prize, served as a Tate Artist Trustee and became the first female Professor of Painting at the Royal Academy of Schools in 2011. She has exhibited extensively in galleries and museums throughout the world and her work is held in prestigious public and private collections. Her stamp is entitled Queen of the Sky. 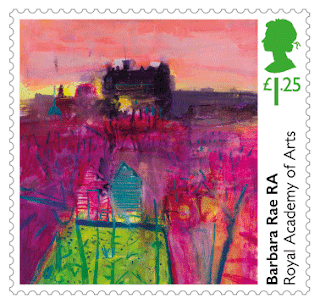 Barbara Rae CBE is a Scottish painter and printmaker who studied at the Edinburgh College of Art and has taught art at the Aberdeen College of Education as well as at the Glasgow School of Art. She has received numerous awards for her art, with a number of works being displayed in institutions such as the University of Edinburgh, University of Glasgow, British Museum and Whitworth Art Gallery. The Royal Academy of Arts’ magazine, RA, has described Rae’s works as “intense colour bursts that evoke dramatic landscapes but remain resolutely abstract… distilling the colour, light and forms of nature into dazzling visions”. Her stamp is entitled Inverleith Allotments and Edinburgh Castle. 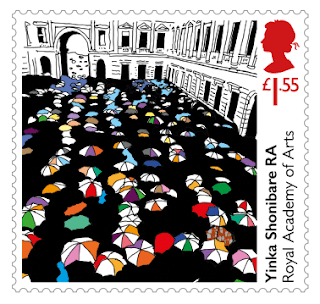 Yinka Shonibare MBE is a British-Nigerian artist whose work explores cultural identity, issues of race and class through the media of painting, sculpture, photography and film. He studied Fine Art at the Byam School of Art (now Central Saint Martin’s College) as well as Goldsmiths College. A Turner Prize nominee, he was awarded a MBE in 2004. He has works displayed in prestigious institutions including the Royal Opera House, the Tate Collection, Victoria and Albert Museum, the National Museum of African Art and the Smithsonian Institution in Washington DC. His stamp is entitled Queuing at the RA.

The stamps and souvenir products can be pre-ordered now from The Royal Mail Website and available from 7,000 Post Offices nationwide from 5th June 2018.