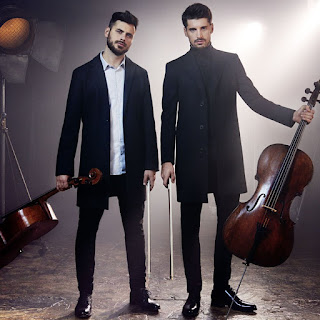 Just moments before the biggest match in club football commences, Luka and Stjepan will give their own special performance of "Seven Nation Army," the anthemic indie rock song known by The White Stripes, as anticipation builds for the two teams to exit the tunnel. Once the players from Real Madrid CF and Liverpool FC are on the pitch, the dynamic instrumental duo will then begin to perform their version of the iconic UEFA Champions League anthem.

In anticipation of their upcoming appearance, 2CELLOS have also released a new video for Seven Nation Army. Filmed in-studio in Croatia, the video (watch it below) shows Luka Sulic and Stjepan Hauser rocking out to the iconic song while sporting the jerseys the two competing teams in the UEFA Champions League final.

"We love a great riff and we love big drums - and they don't get much better than in Seven Nation Army by The White Stripes," said 2CELLOS. "We thought, why not play both on our cellos? We had a blast filming this video, and we especially can't wait to perform this song at the UEFA Champions League final - It will definitely be a moment to remember!"

Hailing from Slovenia and Croatia respectively, Šulić and Hauser have both played the cello since childhood. Šulić graduated from the acclaimed Royal Academy of Music in London, and Hauser from the Royal Northern College of Music in Manchester.

2CELLOS rose to fame in 2011 when their version of Michael Jackson’s Smooth Criminal took the world by storm and they have a big following on YouTube, with a rendition of AC/DC song Thunderstruck being viewed more than 115 million times.

The pair are no strangers to the big stage, having been invited to tour with Elton John, in addition to playing at various world-class venues including London’s Royal Albert Hall and the Radio City Music Hall in New York.

The audio track for Seven Nation Army is also available now via all download and streaming services.