News - Jaws with RSNO at EIFF 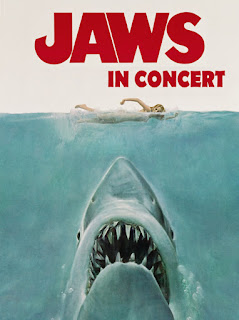 Just when you thought it was safe to go back in the concert hall...


Directed by Academy Award® winner Steven Spielberg, JAWS set the standard for edge-of-your-seat suspense, quickly becoming a cultural phenomenon and forever changing the movie industry. When the seaside community of Amity finds itself under attack by a dangerous great white shark, the town’s chief of police, a young marine biologist and a grizzled shark hunter embark on a desperate quest to destroy the beast before it strikes again.

Now, the original summer movie blockbuster, with an Oscar-winning score by composer John Williams, is set to become an unforgettable film-with-live-orchestra experience as part of this year's Edinburgh International Film Festival as it comes to The Festival Theatre in Edinburgh on Friday 22nd June. Featuring that unforgettable score which always evokes pure terror, Jaws remains one of the most influential and gripping adventures in motion picture history. Now for the first time, audiences will have the chance to experience the power of the Royal Scottish National Orchestra performing the entire score in sync with one of the greatest motion pictures of all time.

Mark Adams, EIFF Artistic Director said, “We are delighted to continue our on-going partnership with the RSNO for this wonderful film and music collaboration. Jaws set the standard for edge-of-your-seat suspense and will be an unforgettable film to experience on the big screen accompanied by the Scotland’s national symphony orchestra.”

RSNO Chief Executive Dr Krishna Thiagarajan added, “It is impossible to imagine Jaws without John Williams’ serrating score. The experience of hearing this marvellously malevolent music live, accompanying the screening will be an unforgettable occasion. We cannot wait to get our teeth into it!”

The 72nd edition of EIFF runs from 20 June – 1 July, 2018. For more information on this year’s EIFF visit www.edfilmfest.org.uk.