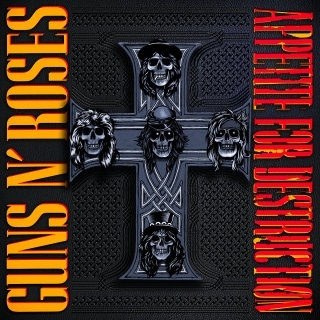 A little bit NSFW, Geffen/UMe celebrates the forthcoming release of Guns N' Roses' Appetite For Destruction reissues with a look at an original, newly discovered, live video from 1989 for It's So Easy...

Filmed at the infamous Cathouse, It's So Easy was never completely finished and has remained in the vaults, unseen and unreleased. The footage was recently uncovered for inclusion in the box set and has been digitally restored in 4K UHD from 16mm film transfers with the original conceptual scenes edited back in with the live footage, just as the band had originally intended.

In addition to It's So Easy, Geffen/UMe will also officially roll out GN'R's 14 seminal music videos spanning the band's career all in newly upgraded 1080p HD pillarbox video. Welcome To The Jungle, Paradise City, Patience and two versions of Sweet Child O' Mine will also feature the newly remastered stereo audio.


Don't worry though, you can also get just the double CD deluxe edition featuring highlights from the box and Super Deluxe Edition with the newly remastered album, selections of B-sides and EP tracks, and 7 unreleased recordings from the 1986 Sound City Session, “Move To The City (1988 Acoustic Version)” from the GN’R Lies session and “Shadow Of Your Love” from the November 1986 first ever recording session with the album’s producer Mike Clink. Limited Edition Foil Art Slipcase CD 1: First Ever Album Remaster from Original Analog Tapes CD 2: 18 highlights from Super Deluxe CDs with 7 unreleased recordings including “Shadow Of Your Love,” 1986 Sound City Session tracks and “Move To The City (1988 Acoustic Version)” Expanded Album Art with Unreleased Photos from Axl’s Personal Archive and Memorabilia.

Or if you're a vinyl fan, Appetite for Destruction has been remastered onto a double album with Limited Edition Foil Art Slipcase and a Side 4 Extra Bonus of Hologroove Hologram of GNR Logo. things you never knew you needed, eh?

All versions of the remastered album come out on June 29th