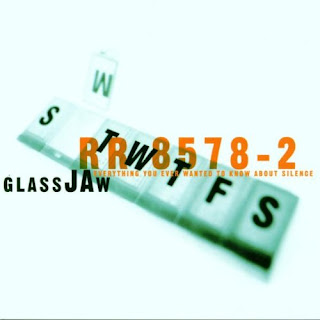 David Ames digs through his music collection to count down his top ten favourite albums in a specific music genre. For his second genre choice, David gets emotional about Emo/Post Hardcore. At #7 it's Everything You Ever Wanted to Know About Silence by Glassjaw...

#7: Glassjaw – Everything You Ever Wanted to Know About Silence

Glassjaw was another of those bands that I first discovered while perusing Shoutweb for up-and-coming artists. The song they recommended actually ended up becoming my favorite of Glassjaw’s repertoire. Luckily, recently my favorite band (Coheed and Cambria) recently took Glassjaw out on tour and I was able to finally see them live. The urgent, post-hardcore, emo/screamo mix they capture on their albums is everpresent in the live show and I was thoroughly impressed. While their second EP, Worship and Tribute received stellar reviews and critical acclaim, for my money Everything You Ever Wanted to Know About Silence will be the quintessential Glassjaw album. It is blistering and frantic and beautiful with strange, unique vocals and raw instrumentals that make the album feel like it was captured all in one take. Lyrically, the band has received negative press for the overall pessimism of the lyrical content but to me, it feels like someone pouring their hearts out into the mics and letting whatever comes to the surface exist as it is: raw and untouched.

“When One Eight Becomes Two Zeros”