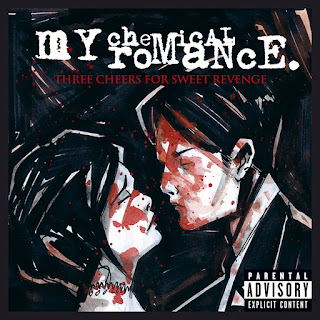 David Ames digs through his music collection to count down his top ten favourite albums in a specific music genre. For his second genre choice, David gets emotional about Emo/Post Hardcore. At #4, it's Three Cheers for Sweet Revenge...

This album is where I will get the most flak. I know that My Chemical Romance doesn’t fit perfectly into any box. Their first album is heavily punk, this album is emo/post-hardcore, the third feels like a queen opus, and the fourth is unabashedly 70s and 80s rock influenced. I simply place them here because they emerged at the same time as Taking Back Sunday and At the Drive-In and their music is somewhat similar. This album is perfectly executed and has that perfect blend of teenage angst, musicianship, and cheeky attitude that made My Chemical Romance so famous. From the start of this record you can be treated to soaring choruses, emotional lyrics and themes, and even a sweet western-twinged song with guest vocals from The Used’s Bert McCkracken. If you haven’t ever heard this album, I know you have at least heard of the band and this is a great jumping on point for the group. Indulge in your inner 15 year-old and scream, “I’m Not Okay!” at the top of your lungs. It’ll be just like high school all over again.


“Thank You for the Venom”

“You Know What They Do to Guys Like Us in Prison”