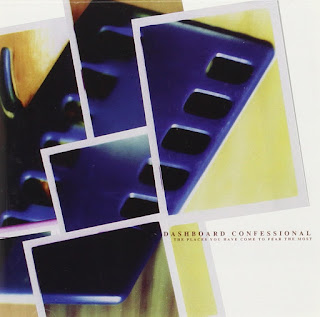 David Ames digs through his music collection to count down his top ten favourite albums in a specific music genre. For his second genre choice, David gets emotional about Emo/Post Hardcore. At #3, he gets to The Places You Have Come to Fear The Most...

#3: Dashboard Confessional – The Places You Have Come to Fear the Most

I had been playing in a hard rock band for about four years when I first heard Dashboard Confessional. I was taken aback by the simple, yet powerful construction of their music. Almost every song was just an acoustic guitar with Chris Carrabba’s soaring vocals layered over-top, incredible lyrics shaping the sound of every song. I affectionately refer to Dashboard as Emolk (emo and folk) as they are like a much poppier version of Bright Eyes. The lyrics of Dashboard are what really turned me onto them and Carrabba’s clever lines influenced my songwriting for years to come. I even had a short stint in a coffee house acoustic group called Calling Gravity and we played a few Dashboard songs. This album is everything that is quintessentially emo: the lyrics are about heartache, especially when dealing with the opposite sex. The vocals are passionate and the music is driving while being soft spoken at times. Give this album a listen if you aren’t a fan of the heavier stuff – this should be right up your alley.

“The Places You Have Come to Fear the Most”