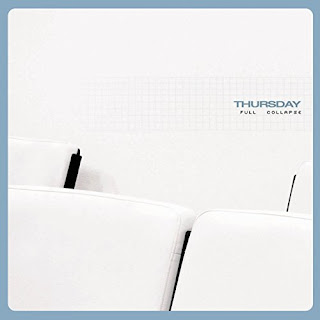 David Ames digs through his music collection to count down his top ten favourite albums in a specific music genre. For his second genre choice, David gets emotional about Emo/Post Hardcore. At #8 it's Full Collapse by Thursday...

Few bands elicit such a strong fan response as Thursday. Even breaking the ranks of Revolver’s top live bands with greats like Slayer and Lamb of God, Thursday is not only known for their stamp on the genre of post-hardcore but also for their incredible live performances, one of which I was lucky enough to attend. The amount of energy and passion this band puts out is damn near unmatched and Full Collapse is like capturing that live energy on a record. Fuse, the television station, played their first two singles on heavy repeat and because of this, I became a huge fan and immediately went out and bought the record. Full Collapse is aggressive and emotional and intricate. The layers crafted by the musicians, the sporadic rhythms and incredibly dynamic, Sunny Day Real Estate-esque vocals make this album a must-listen for anyone who enjoys emo or any other style of rock music.

“Understanding in a Car Crash”


“Cross Out the Eyes”


“Standing on the Edge of Summer”