Feature – Catering to their Needs 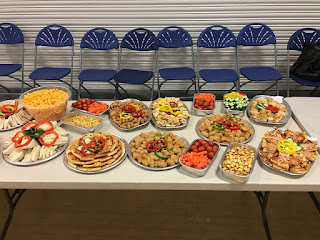 It's Bank Holiday Monday and you may be planning a bit of a family get together now that lockdown is easing. Here's a reminder of Steve Taylor-Bryant's food and music suggestions to help with the party prep...


The first rule of catering is don’t talk about catering. The second rule of catering is that if you have to talk about catering try not to give away catering secrets. The third rule of catering is nobody cares so do what you want. But seriously, I was pretty good at my career for two decades until it started to interfere with my gin consumption hobby and I sired a million children. It gets tiring after a while, chefs work ridiculously long hours (it's no surprise we weren’t unionised, the industry would crumble – crumble! Get it? I’m wasted on you lot) and rarely do I look back on my previous (only – Ed) field of expertise with anything but hatred in my veins. On occasion though I get to talk about buffet food and that puts a spring in my step. I was the King of Buffets (there is no such title – Ed) and it’s the only part of catering that I miss. Taking something mundane and ordinary and making it look pretty so you can charge an absolute fortune pleases me in ways that are probably unhygienic for a kitchen, thank goodness we don’t have health and safety laws huh? There are however a few things that must be done whilst preparing a buffet and music is high up the list. 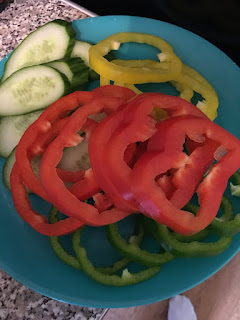 Firstly – Know your audience. In the following description of a buffet I am going to give it was for my youngest child’s  birthday, it wasn’t for the annual artisanal hipster conference so there are no deconstructed avocado smoothies served on reclaimed dryer lint platters here, it’s about children’s party food. Just because its for kids though that doesn’t mean it can’t be spectacular, after all other parents will be there and you might be desperately lonely and willing to do anything to be part of the playground clique… maybe… I’ll be back in a minute those onions have affected my eyes.

Anyway, step one is preparation. Things have to be elegantly dressed but not too over the top that children will be confused by a chicken nugget that looks foie gras – this is how hipsters are born! So, to our first song for our first task. We are slicing pepper rings and elongated cucumber sides, so we must pick something that lifts the spirits because cucumber slicing will drain any life from your soul. It's quite simple, if you aren’t prepping pepper rings for garnish whilst dancing like an 80’s film teenage girl to Cry Wolf by A-Ha, I don’t think you understand catering. 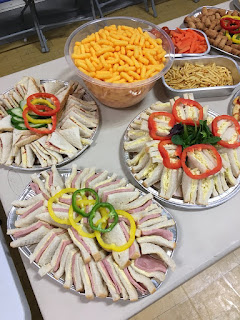 The second task is one that a mere mortal is not qualified for – the speed round. Before you can cook nice things and get to the tasty bits where you obviously have to see if the sausage rolls are to a high standard (Hint: always buy more sausage rolls than you need. He will eat them all - Ed) you have to get the boring bits done. Sandwiches. Sandwiches are the work of the devil, that’s a fact (it’s really not – Ed) and were invented as a punishment for idle chefs. It is a painful job, it is a job you should palm off to your trainee if they aren’t still in human resources at their college trying to convince the tutor that that thing with a marrow constitutes harassment. I’m in a position where I am on my own, so I have to make jam, ham, and cheese sandwiches and it is notoriously (see where I’m going here?) difficult to butter bread quickly. One tip might be to leave the butter at room temperature for much longer than is reasonably safe, but my lawyer tells me that I can’t recommend that. Instead, listen to some Duran Duran. 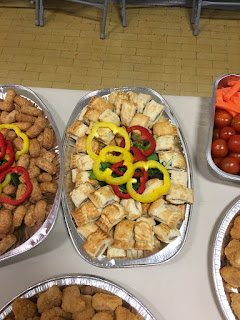 Then we are on to the tasty things. Now we cook chicken nuggets, sausages and sausage rolls, pizzas and, apparently because we care about others, vegetarian food. Vegi stuff aside (Quorn nuggets and cheese and onion rolls along with salad related thingys are all you are legally obliged to provide) this is the part of the day we look forward to. Everything we are touching tastes nice, everything we are touching is fun to eat and to dress on a platter, but more importantly – it all takes a while in the oven, so we can watch some comedy stuff on YouTube. Due to the main ingredient of a nugget being chicken how can you resist a little bit of Spitting Image. 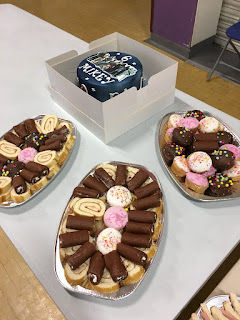 Time to finish off the catering experience of a lifetime by drinking more gin. Oh, and pudding type platters. Its always wise to lay something along the base of the platter to stop chocolate rolls and cupcakes from sliding around, you can use napkins or kitchen roll if you want but where is the fun in that? I use slices of strawberry flavoured Swiss Roll. Speaking of the Swiss… Nope, I got nothing. Whenever I have nothing I resort to Power Station, after all the kitchen was hot and some like it hot.