Educating Omand - System of a Down 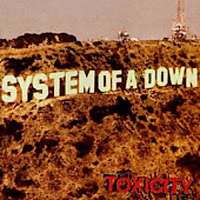 In an effort to further her musical education, Susan Omand has been set "homework" of listening to albums released after the 1980s that she has missed out on. This time she feels the effect of Toxicity ...

Oh, dearest people of the interwebs, you have let me down. Severely down. Some might even say System of a Down… sorry, had to. Anyway, why oh why did you not tell me that these guys weren’t the kind of band I thought they were? For all this time I’ve had System of a Down lumped in with the likes of Slipknot (who, I’m now concerned, are also probably not the kind of band I thought they were, but we’ll find out in the next Educating Omand article) as same-old same-old raar-music but I was wrong, oh so wrong.

Those initial gunshot notes of Prison Song that opens the album physically rocked me back in my seat the first time I heard it and gave me the same feeling that I got from my first listen back in the day of The Prodigy’s Fat of the Land album, which went on to become my absolute favourite album of the 90s. It’s that mix of WTF confusion, curiosity and, yes, fear that heightens the fight or flight senses and leaves you gasping for air. I loved that feeling with the reinvented Prodigy, and I adore it now with System of a Down, as you would have been able to tell if you could have seen the smile spreading across my face as the song continued.

My god, what a good album this is. The sampling is absolutely on point, the musicality is superb and (joy of joys) the lyrics are (more or less) intelligible. And what an interesting voice Serj Tankian has! Almost operatic in range, he can scream and soar over the most complex orchestration then, within bars, switch to soft melodic vocals over a simple backing that is simply beautiful, before dropping even further to a chill-inducing whisper. Yes I do mean orchestration, by the way, because the music is incredible, varied, with such depth and density that it would rival the majority of Classical composition in its inception and execution. There are so many influences, from West Coast jazz to Eastern European folk, conjuring images that range from neon splashed inner cities to the richness of North African souks, and there’s such a range of unexpected instruments used, with clay pipes, sitars and cellos adding hot red and yellow highlights to the cool blue/black darkness of industrial metal. Quite, quite superb.

Prison Song has to be my favourite song on the album because of “that feeling” but that is closely followed by Aerials with its spectacular Middle Eastern sound. To be honest though there isn’t a bad track on this album, there is so much going on within each song. And, as a whole album, Toxicity is by turns multilayered, diverse, fascinating, terrifying and beautiful. However, I’m almost afraid to go looking into more of System of a Down’s work as this album feels, to me, that it can’t be bettered and I would just be disappointed if I tried more. So consider me educated with Toxicity as System of a Down’s uniquely perfect magnum opus and we’ll leave them at that.