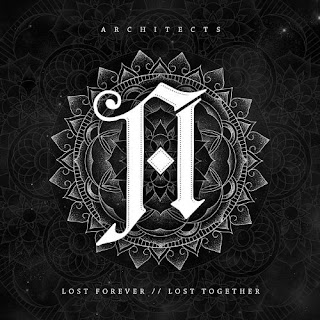 David Ames digs through his music collection to count down his top ten favourite albums in a specific music genre. For his first genre choice, metalheads rejoice! At No 9 is Architects with Lost Forever // Lost Together...

In 2013, I was enjoying my annual visit to the Vans Warped Tour and later in the day, there was a lull in the bands I had gone to see. I had heard of the UK band Architects in passing and had enjoyed the one or two songs I had listened to from them but had never spent a lot of time checking them out. There was no one else I had come to see so I booked it over to their stage. I knew that I liked that I had heard before and was excited to hear more. What I was treated to was one of the most energetic and amazing shows I had ever seen. I was lucky enough to catch them at Warped on one of their few days out that year and what I experienced made me immediately go to their merch table and buy whatever albums that had for sale. Since 2013 I have been a loyal and regular listener to their wonderful mix of punk, hardcore, and metal. The songwriting is topnotch and the musicianship is stellar. Their latest release, All Hope is Gone is a masterpiece, an emotional, gut-wrenching album which has each of the members showcasing how far they have come as musicians. Also, the tragic death of their guitar player and main song writer, Tom Searle (RIP) looms over the album and permeates the music. You should check that out as well, but for today, I wanted to talk about the album that really drew me into their work. It opens with one of the best songs I’ve ever heard (“Gravedigger”) and continues throughout to deliver over and over again. If you are a fan of bands like Rise Against, Architects is similar in a lot of ways but so much heavier. This band has shaped everything that I have written since I saw them on that hot, sweaty October day.