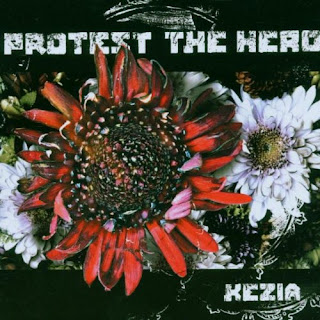 David Ames digs through his music collection to count down his top ten favourite albums in a specific music genre. For his first genre choice, metalheads rejoice! At No 5 Protest the Hero with Kezia...

Protest the Hero began as a heavy punk band but they truly found their sound with their first major release, 2005’s brilliant Kezia. They went from a heavy punk band to an incredible progressive metal band with punk elements. This also one of the few bands on this list that is mostly singing instead of screaming. This band was introduced to me by a friend and when I really delved into their sound, I found that they had musicianship and lyricism way beyond their teenage years. This album is a concept, somewhat vague, revolving around the imprisonment of a young woman named Kezia for reasons that are not explained, other than the fact that she is a woman. The first three songs are from the point of view of the prison priest, the second three from the point of view of the jailer, and the third from Kezia’s viewpoint. The very last song is a comment from the band on the themes presented in the work. The album touches on gender equality and gender roles, hypocrisy, and many other important topics and does so in a wonderfully engaging way. For people as young as they were at the time to produce a work this incredible and mature is a testament to their amazing quality as musicians and individuals. Also, the music video to “Heretics and Killers” is so much fun as the band shows themselves to be the flying monkeys from The Wizard of Oz, but out of work because the witch is dead. Their sound has been evolving ever since their debut and the musicianship has only gotten better but this album was incredibly influential for me and still receives regular play in my car and on my devices. Check them out and prepare to be impressed by the sheer brilliance that is Kezia.


“The Divine Suicide of K”

“No Stars Over Bethlehem”