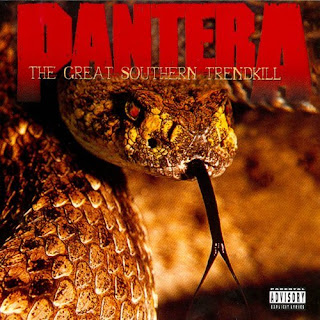 David Ames digs through his music collection to count down his top ten favourite albums in a specific music genre. For his first genre choice, metalheads rejoice! At No 4, it's Pantera and The Great Southern Trendkill...

When people mention modern metal, there are few bands more heralded than Pantera. Not only was their music amazing and incredibly influential, the tragic death of their guitarist (then in his new band Damageplan) in a nightclub shooting only served to skyrocket them even further into the metal vernacular as one of the greats. Pantera’s history spans from their start as glam-metal rockers to their eventual place near the top of modern American metal and according to billboard has sold over 9 million records. In recent years especially, they have become the focus of a lot of hatred from people who don’t like their southern metal tendencies or the terribly misguided politics of their lead singer, but no one can deny their importance and influence. Although they have had many more popular albums (Cowboys from Hell, Far Beyond Driven, Vulgar Display of Power) The Great Southern Trendkill is easily my favorite of their albums. It opens up at full throttle and contains everything that made Pantera popular: driving rhythms, blistering solos, and of course—so much riffage. If you enjoy southern metal at all, this is a must-listen album.