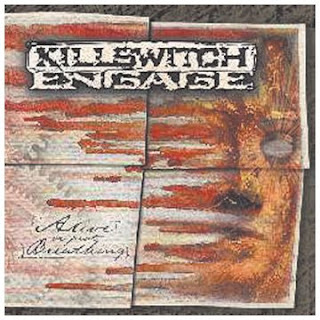 David Ames digs through his music collection to count down his top ten favourite albums in a specific music genre. For his first genre choice, metalheads rejoice! At No 2 it's Alive or Just Breathing with Killswitch Engage...

The mere mention of this album will bring recognition to any metal fan worth their salt from the last 15 years. Killswitch Engage is one of the biggest names in metal, having basically defined and helped to propel the genre of metalcore to the forefront. This album, their first for a major label, has all the makings of a brilliant record: the lyrical content is thought provoking and emotionally driven, the riffs are righteous and heavy, and the melodies are spectacular. For all intents and purposes, this album is basically perfect. Alive or Just Breathing changed music and was so influential that you can hear Killswitch Engage’s influence in almost all modern metal bands today. While they achieved more commercial success with subsequent albums, Alive or Just Breathing set the stage for what the band would become. The vocals are transcendent and pure and raw and the music and vocals complement each other perfectly. I can’t say enough good things about this record and if you have been unlucky enough to have never heard this album, you need to remedy that travesty immediately. Our own Susan Omand reviewed their third major release here as well but if you want to see what made Killswitch Engage what they are, Alive or Just Breathing needs to become a staple of your musical listening.


“The Element of One”