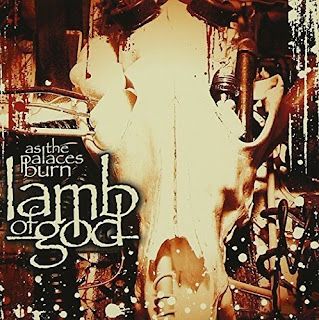 David Ames digs through his music collection to count down his top ten favourite albums in a specific music genre. For his first genre choice, metalheads rejoice! Finally, at No 1 it's Lamb of God with As the Palaces Burn...

In my younger years I was a huge fan of the hard rock scene, especially of those early 90s bands who were lumped in, whether correctly or not, with the grunge scene. Pearl Jam, Alice in Chains, Soundgarden, Stone Temple Pilots, Bush, and others were all that I listened to in the late 90s and early 2000s but one day, out of nowhere, the Scream 3 Soundtrack was given to me and for the first real time, I discovered heavier music that I enjoyed. It had Slipknot, Sevendust, Staind and other bands, and although those bands may not be considered super heavy, at the time it was an awakening for me. When I bought the self-titled Slipknot album and really heard their sound for the first time (the radio edit on the soundtrack cut most of the screaming) I was blown away and the doors to an entirely new genre opened up for me. From there, friends introduced me to Pantera and Mudvayne and other bands that continued to broaden my taste for metal.

A few years later I was blessed enough to go to Ozzfest and experience this type of music live. I was able to see Slipknot, Lacuna Coil, Hatebreed, Atreyu, and many others for the first time and to experience my first metal show. At the end of the afternoon, a band walked on stage in front of a blood red and black backdrop. Five men opened the set immediately with the heaviest music I had heard up to that point in my life and I was blown away by the amazing time signatures and complicated technical musicianship on the stage, while also being impressed by the presence that band could put forward. That was Lamb of God and from that moment forward, I was hooked.

At the time, As the Palaces Burn was my favorite record and I listened to it on repeat for months after Ozzfest. It made me want to write riffs like them, to scream like them, to put forth that kind of energy. I immediately started practicing harder than ever at my instrument in hopes of being able to play anything even close to as well as those guys on stage. That album gets play at least once a week still and I bought it in 2004.

If you have never listened to Lamb of God before, be prepared for raw aggression. The quality of the album isn’t the best as there was a serious trouble with transferring the masters during mixing but the core of the album is still wonderful. I am not going to break down every song but this album is a must have if you are a fan of heavy music. Their subsequent albums are all amazing as well and honestly, some are better than this, but As the Palaces Burn is easily my most influential metal album. It is heavy beyond heavy but still has that southern feel (think a super heavy version of Pantera). Pick up this album and honestly pick up everything else from them. You won’t regret it.


“As the Palaces Burn”