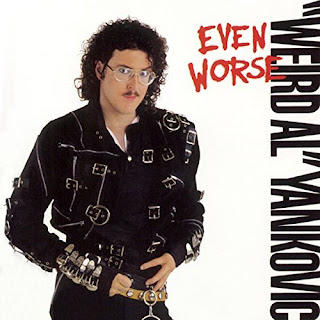 So many well-known albums turn 30 this year and Steve Taylor-Bryant and Susan Omand travel back to 1988 to revisit some of the sounds of their youth that made parents shout "Turn that noise down!" This week, Steve rediscovers Weird Al Yankovic and he gets Even Worse...


Weird Al Yankovic seems to have been parodying songs for as long as I’ve been alive and you’d think after forty odd years the joke would wear a bit thin. It doesn’t. It’s rare, during these listens to things that are thirty years old, to come across something that you could genuinely release today and it would sound fresh but Even Worse would still work and I hate myself for loving it as much as I do.

From the excellent Michael Jackson inspired Fat to the really funny George Harrison (This Song’s Just) Six Words Long, Weird Al has set you up for some great laughing sessions. I Think I’m a Clone Now had me rolling on the floor laughing when I was twelve and had me guffawing like a loon at forty two. Lasagna saw me crying at the same time as trying Latin dancing, something the world will never be prepared for. Melanie, You Make Me and Stuck in a Closet With Vanna White are all brilliant yet the weakest tracks on the album, and Alimony has me once again tied in laughter knots. Velvet Elvis is subtle but followed by the massively over the top Twister which is so clever. The only track that didn’t resonate with me thirty years on was Good Old Days, although I can still appreciate the song. I think it’s important to use the word ‘clever’ when discussing Weird Al because whether you like a particular song or not he has managed to write a comedy sketch, a parody of a classic or loved song, tread a fine line between funny and crude, and prove to the world he can actually sing all at the same time. You don’t have to like him but you have to admire him.

There will be better albums reviewed by the Turn The Noise Down project this year but I’ll guarantee that nobody will have as much fun as I’ve just had.